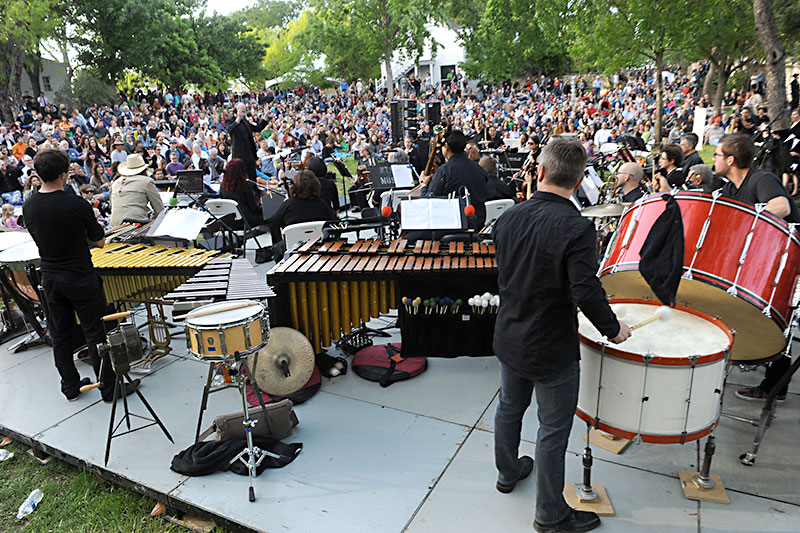 In December 1791, Wolfgang Amadeus Mozart lay in his bed mortally ill, scribbling the notes to what was to be his final opus: a requiem mass, commissioned via an unknown messenger for an anonymous patron to commemorate his deceased wife – though the composer feared that he was writing this work for his own memorial service.

Mozart didn't have long to live, and he didn't live long enough to complete his Requiem Mass in D minor. What followed his death was a balancing act of chutzpah and humility as the composer's wife Constanze and his friends and fellow composers Joseph Eybler and Franz Xaver Süssmayr attempted to finish the work in his stead. Eybler felt he wasn't up to filling in the blanks left by the dead genius and abandoned the project, so Süssmayr tackled the Requiem alone.

He didn't have much to work with. Mozart had only completed the opening movement of the seven we now hear when the Requiem is performed; the rest was a hodgepodge of variously completed sections with scattered notes for vocal parts, instrumentation, and orchestration. Süssmayr wove a complete version of the Requiem over the next few months, and the full piece was finally performed a year after Mozart's death. Since then, others have researched and revised and filled in the missing moments of the Requiem as best they could, leaving a trail of collaborative efforts that have striven to add authenticity to the composer's final work.

Fast-forward to 2009 and the start of a different kind of collaboration. Composer-bandleader and Golden Hornet Project co-founder Peter Stopschinski had discovered a scholarly work in which the sheet music for the Mozart Requiem had been edited so that only the notes written by Mozart remained. Stopschinski wondered what it would be like to start from scratch and create a new version of the Requiem from the purely "Mozart" bits. Then, pushing the idea further, he thought: What if this new version took collaboration to an extreme, where different sections of the Requiem were assigned to different composers?

Stopschinski shared his idea with an enthusiastic Brent Baldwin, newly ensconced as Texas Choral Consort's artistic director. "The concept," says Baldwin, "was to take this framework with all these erased, empty staves and have different composers fill in the blanks. Not as other scholars have done, trying to figure out how Mozart might have done it, but in their own contemporary voices." In the end, 10 composers who hailed from a variety of musical styles and backgrounds worked by a single rule: Take what Mozart was known to have written, toss out the rest, and come up with new music to complete a modern take on the Requiem. 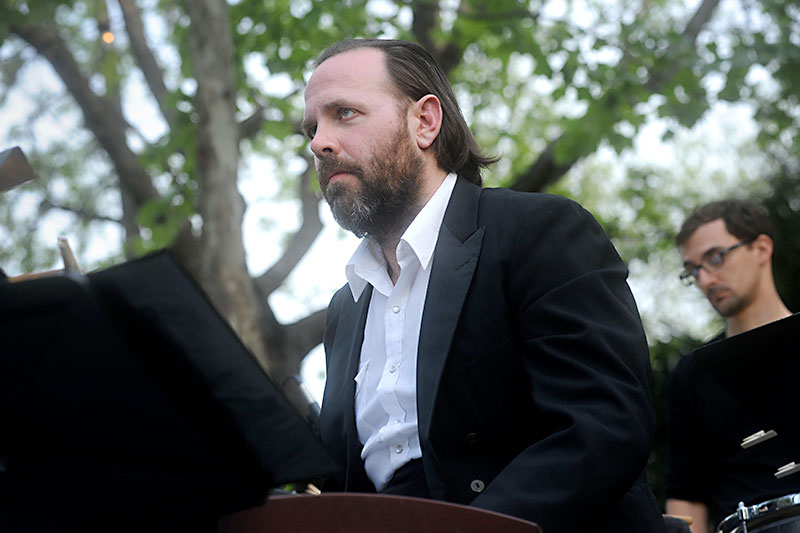 Five years later, after a handful of "mini-sneak peeks" – like singles doled out in advance of an album's full release – Mozart Requiem Undead premiered as the kickoff to the 2014 Fusebox Festival. Before an overflow crowd at the historic French Legation, Baldwin conducted a "musical force" of more than 200 musicians and singers under a gorgeous Austin sky. Those who couldn't squeeze into the lush grounds clambered onto the perimeter walls or just lingered on the sidewalks outside and listened.

What they heard (and saw) was enormous, spectacular – music in the flesh. And then, as with all live performances, it was over.

But now, two and a half years later, Mozart Requiem Undead is back from the dead, this time in the more controlled environment of Bass Concert Hall. (Texas Performing Arts, which programs that UT venue, has been a partner in the project from almost the start.) As incredible an experience as the premiere was, conductor Baldwin is relieved to be playing this one indoors. "There are enough heart attack-inducing things in a project of this size as it is," he says. "It's nice to know this time the weather won't be a factor."

There aren't many other changes besides that of venue: Texas Choral Consort will once more provide the vocal heft, though the choir is now called Panoramic Voices; original composer-performers Stopschinski, Reynolds, and Quesada will be on hand to play live again. Even the soloists are the same: Gitanjali Mathur (soprano), Laura Mercado-Wright (alto), Paul D'Arcy (tenor), and Cameron Beauchamp (bass).

Beauchamp will do double duty as a member of Roomful of Teeth, which is also on the bill. The Grammy Award-winning ensemble is committed to "mining the expressive potential of the human voice," and its vocalists will dig deep into "The Ascendant" by Australian composer Wally Gunn. "It's a super-cool piece," says Beauchamp. "Six movements for us and a drum set," manned by "the amazing Matt Thompson."

Following that is the world premiere of "Tired Tropes for Battered Souls," by Caleb Burhans, performed by a supergroup made up of all the singers of both ensembles. Baldwin describes how his Panoramic Voices will provide "more traditional sounds, mixed with weird vowel modifications and things most singers don't do every day," while Roomful of Teeth will be doing "their crazy vocal sound effects over the top of it – it's just a really amazing piece." Beauchamp, who's sung other Burhans commissions with RoT ("He's part of our family") describes this latest work as "contemplative, a nice juxtaposition between the Teeth set and the Undead set."

Lovers of the Requiem may have the feeling it has haunted these parts of late – the Austin Symphony Orchestra just performed the "original" Mozart Requiem last weekend, coincidentally featuring three of the same soloists who will sing the Undead version. Those lucky enough to have attended the symphony's performance can compare and contrast these dueling Requiems.

So which version did ASO music director and conductor Peter Bay choose? Something modern? Something debated and updated by classical music academicians? Bay (who saw the premiere of Undead and was impressed by its concept and scale) says he sought out all the scores and recordings of completed versions of the Requiem he could find until he "lost track," eventually opting for the one he felt was closest to the composer's, the one first completed by Süssmayr, whom Bay credits with being present at the dying composer's bedside. "Maybe Mozart sang to him," opines Bay. If so, that would certainly lend extra credence to Süssmayr's version, boasting an intimacy with the composer unattainable by anyone else. "I give him the benefit of the doubt," is Bay's final assessment, at least until a better version is brought to life. Or returns from the dead.

A version of this article appeared in print on September 16, 2016 with the headline: A Reanimation Reprise

Shawn Sides and Graham Reynolds: Rude and Golden
How two of Austin's top creative stars meld a busy life of art and love 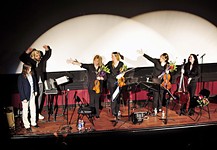 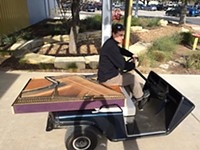