The venues, events, troupes, and individuals who have transformed Austin into a "Yes, and" boomtown

With no more than a simple suggestion – say, an unlikely place for a crowd to gather, like a broccoli farm or the bottom of the sea – these artists can spin a story as elaborate as one of Scheherazade's, with vivid characters, winding plots, and sudden surprises. They set out with no preconceived direction for their tale, no destination or path to move along; they just pull character, narrative, emotion, and, yes, pratfalls and punch lines out of thin air as they go. They are adepts of spontaneity, practitioners of the unpredictable. They are improvisers, and Austin is overrun with them.

Several hundred are said to be active at present, and you can find them making instant theatre across the city seven days a week, 52 weeks a year. They present dozens of different shows weekly, everything from short-form competitions to long-form narratives based on literary and film genres to stories for kids narrated by a dog (with an actual dog onstage). They combine and collaborate in scores of troupes, as varied in style and hard to track as local bands, and every few months, they congregate in festivals so well-established that they draw improvisers here from across the nation.

Talk about an unlikely place for a crowd to gather. Until the mid-Eighties, the capital of Texas hadn't much use for improvisation, preferring its humor from stand-up comics and sketch troupes like Esther's Follies. And even once improv did take root here, it took more than a decade for the number of homegrown troupes to hit the double digits.

But in the past 10 years, improv's expansion locally has been explosive, turning Austin into a Spindletop of "yes, and" – a boomtown boasting four theatres showcasing improv year-round, all offering performances and classes, plus an institute providing personal education and corporate training (put them together and you have what's jokingly called the "Five Families of Austin improv"); nationally recognized festivals; and, between the theatres and fests, 1,800 improv performances annually. Oh, and the audiences to fill those 1,800 shows.

But that growth isn't only about numbers. It's also about the troupes that have been together for years and grown into rich ensembles, about Austin improvisers whose reputations have grown in the international improv community and are in demand as teachers and performers around the world, about the individuals who have built the theatres where improvisers have honed their skills, and about an open community of improvisers who support and encourage one another. With the year's biggest improv party, the Out of Bounds Comedy Festival, commencing this week, Chronicle writers Wayne Alan Brenner, Ashley Moreno, Sean L. Malin, and myself offer this introduction to improv in Austin. 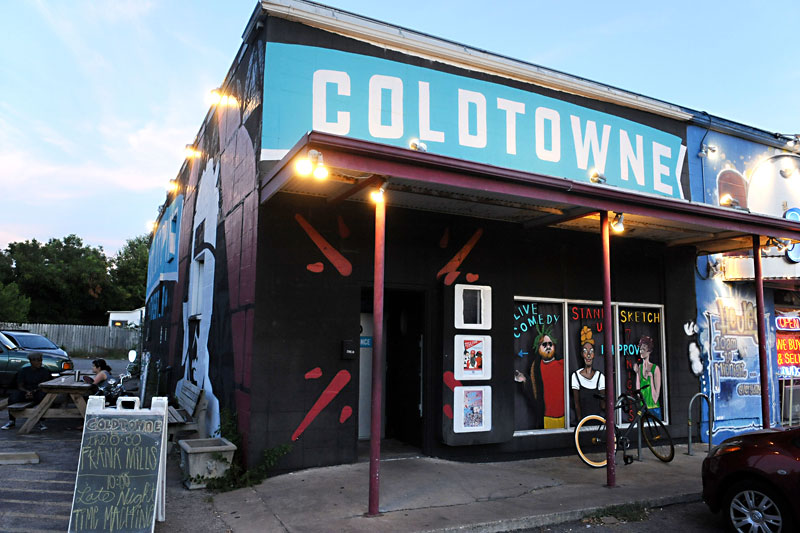 In the Airport Boulevard corridor between I-35 and Koenig, amidst a host of small, beloved local businesses (Mrs. Johnson's Bakery, Quality Seafood, Lammes Candies, the Omelettry, et al.) is ColdTowne Theater, an endearingly tiny, BYOB theatre that shares a wall with another Old-Austin holdout, I Luv Video. It bears the name of the New Orleans troupe that moved here following Hurricane Katrina, chose to stay, and opened this theatre. It was co-founded with the improvisers of the Frank Mills, a troupe which still headlines at the theatre every Thursday. Other weekly improv shows include the women of Loverboy (Wednesdays), the bad boys of Bad Boys (Fridays), Movie Riot (Fridays), Midnight Society (Saturdays), Stool Pigeon (Sundays), and the show adored by kids and dogs, What's the Story, Steve? (Saturdays). Stand-up also represents regularly with Live at ColdTowne (Fridays) and the open mic Shtick, hosted by Maggie Maye (Mondays). 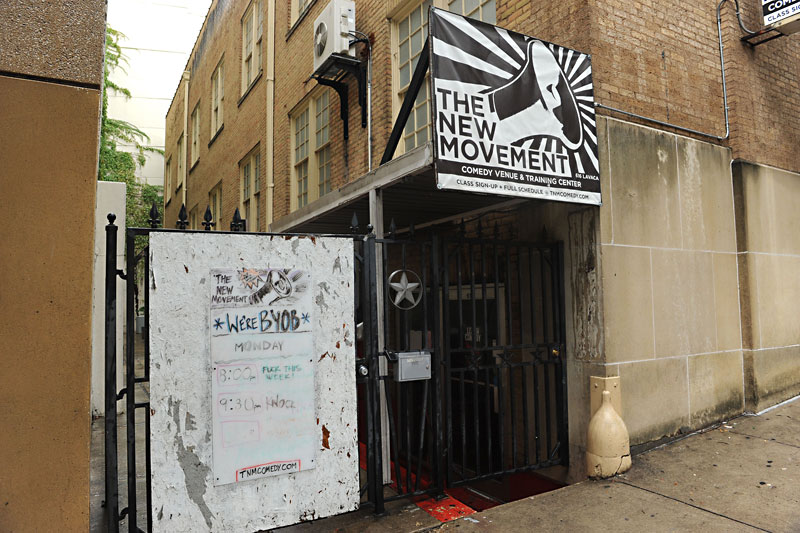 On a particularly odd night at the New Movement, the improv conservatory on the busy corner of West Sixth & Lavaca, you may – as I have – see multiple off-the-cuff Jean-Luc Picard impressions in a single longform show. Since opening in 2009, TNM has cultivated an affecting, bizarro approach that sets its weekly programming and classes apart from other local clubs. Its theatre is rarely empty, though it's also small, creating immediate physical contact between audience and improvisers. In shows like Fuck This Week and Opposites, run by recurring groups of (sometimes overly) intense comedians, the "fierce experimental mixture" of styles hits you like a humor freight train. At nascent classics like The Megaphone Show, the work done at TNM embodies the "out of bounds" trope. But after a night there, exhaustion becomes a badge of honor: No venue in the city is as unpredictable, abstract, or inclusive of up-and-coming improvisatory talent. 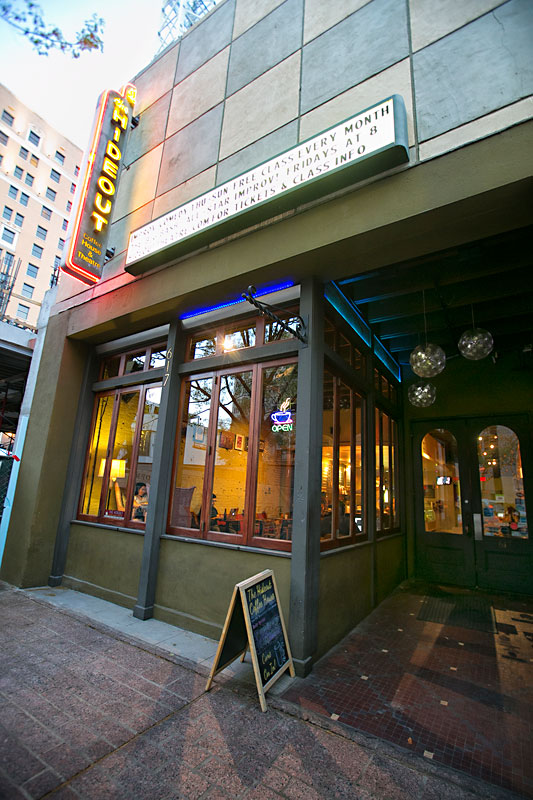 One of the busiest sites of Austin improv is located in a historic building in the heart of Downtown near Sixth & Congress. Opened in 1999 by Sean Hill, the coffee shop/theatre is now under the ownership of longtime improvisers Kareem Badr, Roy Janik, and Jessica Arjet. The cafe's array of coffees, beers, wine, and victuals, mmmm, ain't half bad at all, and the two stages – 90 seats downstairs, 50 seats up – host shows seven nights a week, as well as a multilevel improv school (with a highly regarded kids' program), and the annual Improvised Play Festival (April), Improv Marathon (June), and WaffleFest (November). The style of improv (as heralded by house troupe Parallelogramophonograph) tends toward genre-based long-form narrative work in limited-run shows such as Process; Boy, Howdy!; and Scene of the Crime, but the weekly short-form Maestro competition, a seemingly eternal showcase of talent new and old, remains among the most popular improv events in the city. 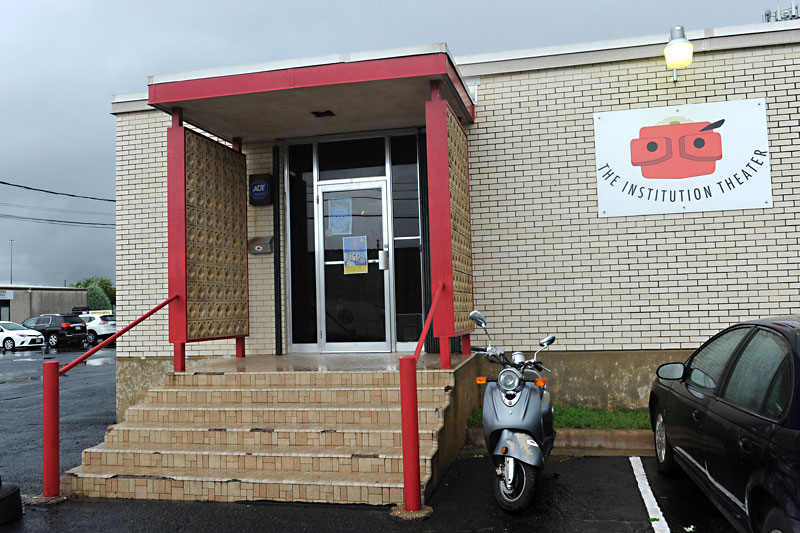 This southern outpost of Austin improv was carved out of an industrial space in the warehouse wastelands between St. Edward's University and Ben White Boulevard by the scene's Lewis and Clark (or possibly Shields and Yarnell), Tom Booker and Asaf Ronen. An outgrowth of classes Booker began teaching four years earlier, after he abandoned L.A. for the ATX, the Institution has a strong focus on education (with Ronen overseeing a mix of classes in stand-up, sketch writing, filmmaking, and auditioning, as well as improv), but weekends also see performances in its 47-seat black box theatre. A variety of improv and sketch shows are booked on a monthly basis, along with stand-up events such as the LGBT showcase Laugh Out Proud and the after-hours Clique Bait. Sundays, the faculty takes the stage in The Rubber Room, which includes an open jam, a segment showcasing the teachers, and a segment where they play with audience members chosen by lottery.