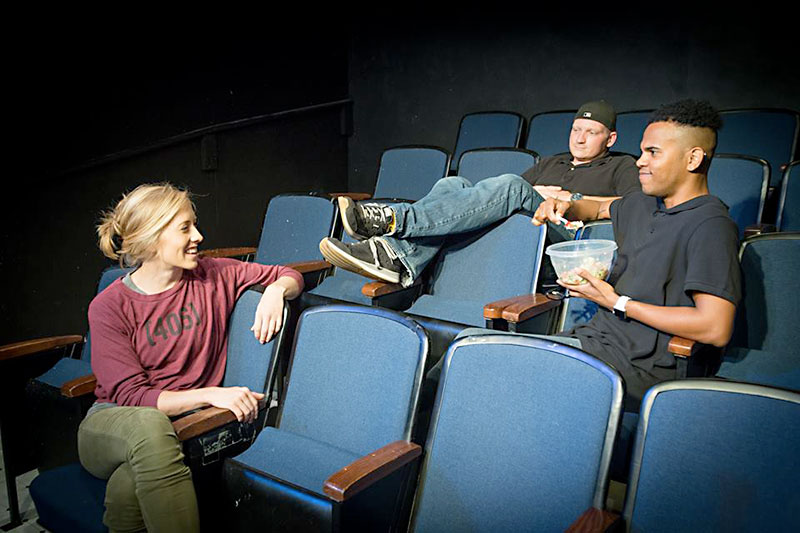 At the movies, our eyes stay locked on the screen. That's where the action is, after all, in the larger-than-life figures fighting protean battles over romance, betrayal, disaster, disease, life, death. Everything that happens up there is so much bigger than us, and we're mesmerized by it.

But playwright Annie Baker knows that to stare only at the screen is to miss some of the most important drama that takes place in that space. So in The Flick, her Pulitzer-winning play from 2014, she flips our perspective, forcing our gaze on the cinema's seats and booth, where other conflicts are under way – smaller in scale perhaps, but just as dramatic and profound in their consequences, and ultimately just as meaningful and heartbreaking as the ones played out in light and shadow.

These struggles, though, play out in flesh and blood – specifically, the flesh and blood of Sam, Avery, and Rose, three employees of the Flick, the last movie house in Worcester County, Mass., showing films with a 35mm projector and maybe the last movie house in America operating with a single screen. In other words, it's an odd, out-of-the-way relic of another era, destined for the dustbin or a major overhaul, but in the meantime kept on life support by a few minimum-wage misfits whom we observe in their daily rituals when the films have ended and the customers have gone. Now, watching a couple of guys sweep up popcorn and toss cups into a trash can may not sound that dramatic, but in showing us this, Baker is initiating us into the rhythms of the quotidian world these people inhabit. It's a small world, running on routine and small talk, and we need that feel for it to recognize how sporadically – and surprisingly – out of it will arise an admission of deep feeling or revelation of personal history that shows the speaker to be much more than a workplace drudge, to be a complicated, distinctive human being.

In Hyde Park Theatre's production, smartly staged by Artistic Director Ken Webster with the actors out in the seats and the audience watching from the stage, Avery, Rose, and Sam are certainly distinctive and human. As the nervous newbie Avery, Delanté G. Keys is stiff and awkward, looking as uncomfortable in his skin as one of those aliens impersonating a human in Men in Black. It's a reference Avery himself might use as he's a hardcore movie junkie, quick to debate the merits of celluloid over digital and condemn cinematic dreck like Avatar. When Avery's passion for film possesses him, Keys loosens up and lights a fire in the character that stands in compelling contrast to his Urkel-like nerd. Sam is at the opposite end of the job spectrum: the stiff who's been punching the clock a long time – too long, as Shanon Weaver (a Chronicle theatre writer) shows in his sagging shoulders, dully repetitive movements, and bitterness in voicing his frustration about being passed over for the projectionist job. Still, behind the weariness is a glimmer of compassion that Weaver lets shine through, as when Sam offers to take care of a vile bathroom disaster for Avery or achingly expresses feelings for Rose. And as for that lone woman in this triangle – who took that projectionist job Sam felt was his – she stands between the men, seemingly a free spirit, her devil-may-care demeanor making her both attractive and intimidating. Katie Kohler's offhand delivery and spontaneity make that side of Rose most convincing, but Kohler also lets us see the character's deep need, her fear of rejection and of losing her job. There's a haunting vulnerability in her Rose – indeed, in all the characters, which comes through most poignantly when the actors stare straight ahead in silence for lengthy periods. It's quite a risk on Baker's part, trusting performers to expose themselves that way and have audiences study them closely, quietly, for long stretches. But like Baker's gamble in repeating the word "ladder" more than 100 times in The Aliens, it can result in moments of theatrical power and stirring humanity, and it does here.

Much of what's in The Flick could happen at any job; the same mundane duties day after day, the idle chitchat about co-workers and pain-in-the-ass customers; the relationships that are personal but not too personal (more than acquaintances but not really friends); the yin-yang tension between a desire to quit the job and fear of losing it. But Baker's choice of a movie house setting feels far from arbitrary. Her dialogue is too stuffed with comments about movies and what they mean to us, their place in our culture and our lives – our needs to see them and talk about them, even argue about them; our personal attachments to particular films; our reverence for and connection to their stars. Baker has even built her story from movie tropes: the grizzled veteran, the greenhorn, the femme fatale, the beloved business in danger of closing, the romantic triangle .... It's all there, all that makes movies matter to us. But, the play tells us, we don't have to look at a screen to see it. If you'll just turn around, you'll see it all in us. We are the movies, says The Flick. So turn around, and watch. Watch. Watch.