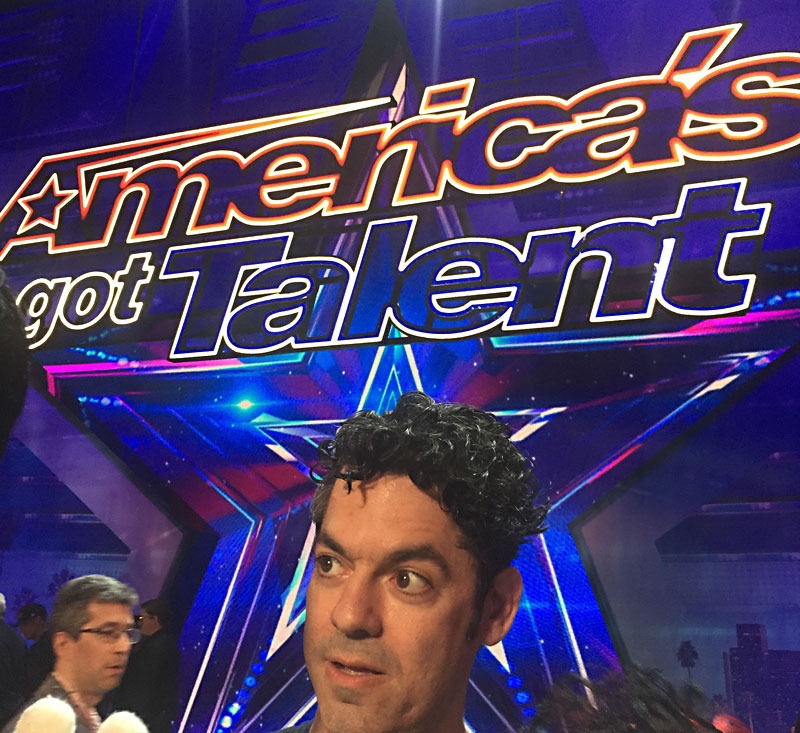 Brently Heilbron on the AGT set

I am backstage at America's Got Talent with my emo puppet band Fragile Rock, being interviewed after our performance.

My eyes are at shoe level. Nick Cannon's shoes, specifically. Shoes that probably cost more than my self-esteem. Through an aching outstretched arm, my puppet alter ego Milo S. asks, honestly, "Nick Cannon, what do you do when you get rejected?"

And, of course, it ends this way.

A year earlier – to the day, actually – to get through a divorce, I tried writing some appropriately mopey songs. But things don't always come out the way you want. I love sad music, but as a satirist, I eat up the "fevered egos" (to paraphrase Bill Hicks) often associated with this genre. My brother grew up loving the Smiths and the Cure, and as a child I remember thinking that with all that T-shirt money, you'd think they could go to Disney World or something and cheer themselves up.

So I put a joke on Facebook to the effect of: "I'm going to start an emo puppet band and call it Fragile Rock." To my surprise, people started signing up to be part of this. First, Shaun Branigan of Esther's Follies, who I had known from my early days at the Velveeta Room, mentioned that he'd be interested in making puppets. (To be honest, I'd never even thought of who would do that.) You're in! The band came from the Austin improv scene: Ryan Hill (guitar), Jayme Ramsay (drums), and Cindy Page (bass). The rest of the characters were filled out by improvisers with experience in puppeteering and music: Bryan Curry, Kim Stacy, Luke Wallens, Taylor Love, Megan Thornton, Chad Smith. We recorded one song called "I Am Sad and So Am I" after-hours at KUT, and director Jessica Gardner made a fantastic video for it. Soon after, I wrote a musical for the band that ran at the Institution Theater, and we even had our own therapist, Dr. Landy (Bryan "LuBu" Roberts), whose name I gleefully stole from the real therapist who dabbled in Brian Wilson's sandbox.

The band, like the best projects, had a strange gravitational pull of its own. Elijah Wood went on tape and said he was in love with the bass-playing puppet Nic Hole (Megan Thornton). Even Big Bird's Caroll Spinney sat down to chat with our nice-guy guitarist puppet, Kyle Danko (Chad Smith). What started as a joke suddenly became very real and deeply felt.

Fragile Rock grew into a crew of 10-plus pieces, and we rolled deep. When we played concerts, we were the Polyphonic Spree of Austin's emo puppet scene. For a show the night after David Bowie died, we hastily assembled a cover of "Heroes" complete with a 10-foot David Bowie rod puppet that Shaun had made and took three people to work. It was a hell of a cathartic show. The very next morning, I received a message on Facebook: "Hey Brently, I'm a senior producer on America's Got Talent, and we'd love to have Fragile Rock audition for the show." Wow. A senior producer, I thought. (Go, seniors!) One catch, though: We would need to completely cover up the actors – something we'd never done before. And the audition was in Dallas, the next day. We made it happen, as improvisers do. Arms were outstretched, bodies hidden, band masked, we fought and bickered our way into emo glory. We auditioned three times, and the producers grew more British with each floor we ascended. Finally, we got the news: We're in. So we're all packed together in cellophane and flown to Los Angeles on AGT's dime: six puppets, seven puppeteers, three musicians, one videographer, one puppet master, and a group of significant others that includes my girlfriend Sam and Ryan and Amanda's wives (dubbing themselves the Yokos). We are a small militia of whimsy.

After a day of settling into L.A. and ingesting smuggled queso, we are ready to shoot. And shoot we do. All day. First in the basement of the theatre with a cantor (also a contestant). Did they know I'm Jewish? I don't know. Did the cantor hate us? Yes, he did. From there, we keep filming, backstory after backstory. We're assured they need enough footage to last all season. We were going to be a hit! Suddenly, something I never knew I wanted became the most important thing ever. My arm aches as I spend the day crouched. Shout-out to Trouble Puppet Theater Company and every actual puppeteer who is better than me in every way. I'm just an idea guy. During this shoot, our own Chad Smith is approached by an AGT crew member. "Have you worked with Henson? You're Henson good." Chad is still living on that compliment. And yes, he is that good.

We film right until we perform in front of an audience. Backstage, my puppet, Milo S., gives pep talks, fights with the bassist, yells, frantically cries, and generally does everything to feed the beast of reality television. We got this. They need footage for the whole season! The actual musicians are sequestered far from us. The puppet band is given monitors to see how we look as we crouch behind masking. Then we hear them come out. The judges! Simon Cowell (famous asshole!), Heidi Klum (famous German and Seal lover), Mel B (Scary Spice), and Howie Mandel (Canadian germaphobe and actual childhood comedy hero). The show is hosted by Nick Cannon, who married Mariah Carey. It's like a Golden Corral of celebrity judges: Nothing adds up, but everything equals explosive diarrhea.

One problem: We can't see the judges, and we can hardly hear them, ourselves, or the band. Uh-oh, I thought. This isn't a good sign. We look at each other, crouched, laughing. Everyone's eyes say the same thing: What the hell did you get us into, Brently? It's a look I am all too familiar with.

The next moment is frozen in time. I think Danny Palumbo, the 2015 Funniest Person in Austin winner, put his experience on AGT best. (After getting booed off the stage.) "I became a superhero like Batman. All it took was watching my parents get murdered in front of me."

The band starts to play, and I start to sing. All this would have been great if we'd started at the same time. That first buzzer comes quick and loud like thunder. The second comes like a bolt of lightning. At this point, they usher off any Yokos in the wings. Things aren't going well, and AGT wants to reduce the collateral damage. The third and final buzzer is like a mercy killing, finally putting our fevered egos to rest. I have no idea who started the buzzing and who finally finished it.

Then comes the feedback. Haven't we all seen this on TV? Is it really happening to us now? Our puppets take it all, which must have been equally humiliating for the judges. The first comment is from Mel B: "You're all just very mean. I don't like mean." Holy shit, we are too mean for Scary Spice! The second comes from Howie Mandel: "This project is entirely without merit, just like Simon's new shows. Haha." Ouch! That one stings. This was my project, after all, these were my words, and I fucking had your comedy albums as a kid, dude! That's like having my G.I. Joe steal my girlfriend in front of an audience. I don't remember what Heidi Klum says – perhaps it was some sort of birdlike "Cu-Kaw! Cu-Kaw!" before flying away into the rafters. Finally, Simon Cowell is up. Even his crew cut has an icy British accent. I attempt to preempt this nightmare by having my puppet say, "I'm just like you, Simon. We're both misunderstood geniuses that everyone hates." Nothing. In fact, he seems to suck my comment in like the sea inhales the tide before a tsunami hits. For those expecting a classic Simon insult, they will not leave disappointed. Simon says (and I will never, ever forget this), "If I were a dead toddler, maybe I would enjoy this terrible thing." I say to myself, "Jesus Christ! What an awful thing to say!" Except the thing is, it isn't to myself, it's out loud, completely breaking character. It was such a natural reaction to the worst thing I've ever heard. Only later do I learn that he had said "deaf," not "dead." Face, meet palm.

During our "exit interview," Nick Cannon assures me that he's never been rejected at any point in his life. "What's next for your band?" he asks with the kind of joylessness that comes from someone who must've had to watch Glitter a lot. What's next? I respond the only way I know how.

"You ain't gonna see me cry. A tear don't fall from a glued-on eye."

Brently Heilbron is an Austin writer and comedian. He is the host of the PBS series Stand Up Empire and lead singer of the emo puppet band Fragile Rock.