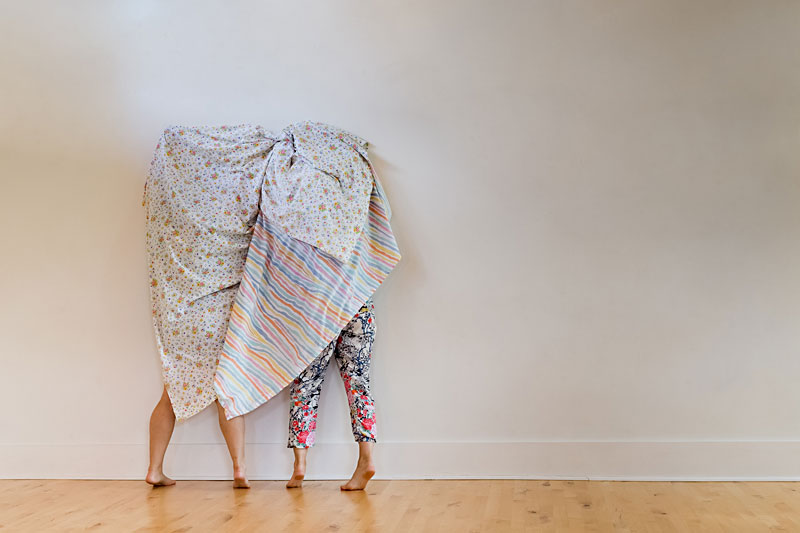 The first subsection in the Wikipedia entry on "Satiric misspelling" is "k replacing c," as in "Amerika." In The New Republic, a writer named Chloe argues that the Kardashians have made a joke of her name and others, since the letter k is inherently funny and makes a mockery of c. It's true, in my experience: The credibility-busting letter swap (and my editorial pride) almost cost me a great deal on the family Honda from Leander Trux n Karz. The k in Kozyworld, a performance by dancer-choreographer Julie Nathanielsz and dance poet Margit Galanter, suggests that the physical comfort explored within it is fabricated – it's an unauthorized, perhaps subversive, copy.

The work, presented by Nathanielsz's organization, the Meeting Point, was the culmination of a collaboration between Nathanielsz and Galanter (from Oakland, Calif.) that began at an art residency in rural New York and included workshops held in Austin in May. In a beautiful backyard studio lined with windows, with one corner filled in by an audience of perhaps 20, Nathanielsz and Galanter shape-shifted and formed sculptures beneath pastel-patterned bedsheets. A result was meditation on human-fabric relations: In what ways do we augment ourselves and others with cloth? We cover, swaddle, bind, shuffle; it drapes, whips, protects, restricts. Another element, a rolled-up spiked-foam mattress pad, changed recognizably human shapes into absurd creatures, toothed and large-beaked. Its syntheticness was a foil by which to gauge the surrounding materials: the wood floor, gallery-white walls, vegetation outside the windows, and fabric sheets (by the end of the section, I had pegged one as 100% cotton and the other as a polyester blend).

A gentle alarm sounded, signaling the end of the dream state. The many windows were methodically covered, and a video projection showed the waking world in three panels: a flip book showing how to assemble an Eames chair, clouds floating above evergreen trees, a hillside creek. But video editor Erika Mijlin had put them on a forward-backward loop: Which was real? For the final section, the performers re-emerged, sans sheets, and slipped into matching red one-pieces resembling toddlers' playsuits, designed by Sarah Lankenau. Casting shadows on the walls around them, the performers explored but stuck close together. They seemed to predate, or be culturally outside of, competitive dressing: Uniformity, here, was reciprocal with friendship.

After the work, Nathanielsz invited the audience to "linger." I bolted (I prefer not to discuss performances so immediately) and was caught in a downpour before I reached the street. Glancing back at the studio, I could see, aglow through the windows, that members of the audience had stretched out on the floor to chat. What began with a k had, through practice, process, and spectacle, softened into c.