To Kill a Mockingbird at St. Edward's University 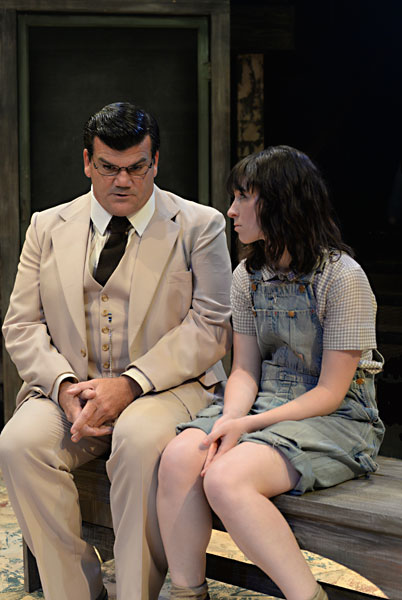 Harper Lee, it's said, was told by her publishers in 1960 not to expect to sell more than a couple thousand copies of To Kill a Mockingbird. Within a year, a half-million had been sold and her novel had won the Pulitzer Prize. Within three years, Horton Foote would accept an Oscar for adapting the book for the screen. Seven years later, playwright Christopher Sergel began the task of adapting the novel for the stage, a play that would not reach its final form until 1990. Now in 2015, St. Edward's University is tasked with keeping fresh and relevant one of America's most-loved pieces of literature. And just as To Kill a Mockingbird has exceeded expectations for 55 years, so does this theatrical version.

As it turns out, Mockingbird ain't broke, and director Robert Tolaro wisely doesn't try to fix it. Lee's tale needs no new shine, no polish – it just needs to be told well. And at the Mary Moody Northen Theatre, it is told very well. It starts with the immediate comfort offered by Catherine Brandt's weathered set. A simple porch, tire swing, and tree stump conjure images of high school reading assignments, innocence, and home. Then Equity guest artist Carla Nickerson (in a thoughtful turn as Calpurnia) breaks the pre-show silence with singing. Through narration provided by the townsfolk of fictional Maycomb, Ala., we meet all the players, each very well cast and every one providing the agency and energy for the story, fully backed by a creative team that knows this cake will be delicious without any special frosting.

The student actors, looking period-perfect in costumes by Mercedes O'Bannion and hair & makeup by Tara Cooper, feed off the energy of the Equity actors and vice versa. Of particular note on the student side are Rachel Powers as Scout and Frankie Guidone as Jem, inhabiting their characters fully with the power of seasoned actors. Other standouts include Colleen McCool as Miss Stephanie, Jordan Mersberger as Heck Tate, Maureen Fenninger as Mayella Ewell, and Natalie Crane as Maudie. All the actors, with their Southern drawls (perfected by dialect coach Sheila Gordon), tell part of the story here, but Atticus Finch is the linchpin, and Brian Coughlin gives an incredible performance, full of strength and kindness. The role is difficult and complex, but Coughlin makes it seem easy, with every choice well executed, from posture to vocal volume. At the performance I attended, understudy Aaron Alexander filled in for Marc Pouhé in the part of Tom Robinson, and was very moving as the wrongly accused defendant at the heart of the story.

Sergel's script focuses on three key scenes, which Tolaro has his entire team realize feelingly. The sheer beauty and innocence displayed as Scout obliviously stops a lynch mob elicits a tear or two, Tom Robinson's trial has the audience leaning in, and Bob Ewell's comeuppance at the hands of the as-yet-unseen Boo Radley still provokes gasps. The show is well lit by Kathryn Eader, particularly during the attack on Jem and Scout, though a few lighting shifts during the trial (presumably meant to shift mood?) are a bit distracting. On the whole, however, the relevant motifs of class, race, and poverty (and the ignorance it causes) come through in a compelling manner, and audiences will likely leave thinking we could do with a few more Atticus Finches in our lives. This St. Ed's production proves yet again that To Kill a Mockingbird does not require mining for new discoveries; there's gold lying right there on the riverbed.

To Kill a Mockingbird