When it comes to fans of the fun fun funny, Fun Fun Fun Fest 2015 may feel like a bit of a reunion. A host of familiar faces will grace the JASH Comedy Yellow Stage, from such standout stand-ups of the national scene as Tig Notaro and Doug Benson to local lights like Chris Cubas, the New Movement, and Master Pancake. Fri., 2:30pm, Yellow Stage
If all you know of this Brooklyn-based joker is his voice work as Gene on Bob's Burgers, be advised: Mirman is a comedy force of nature. For proof, look no further than his just-released album, I'm Sorry (You're Welcome): a 9-volume, 7-LP set that includes, among other weirdness, a 45-minute crying jag, a collection of 195 orgasms, guided meditation, a complete sound effects library, and an introduction to spoken Russian. If conceptual comedy is your bag, get Mirman.

Fri., 3pm, Yellow Stage
Chronicle cover boy JT Habersaat continues to pull together comedians who aren't afraid of the edge into shows with the bite of a Black Flag disc. His partners-in-crime here are Clint Werth and Kristen Becker. Fri., 4:25pm, Yellow Stage
Fri., 11pm, The North Door
Notaro was last at FFF during her annus horribilis, the year she suffered through a breakup, the loss of her mother, and bouts with pneumonia, a near-fatal intestinal illness, and breast cancer. But her willingness to speak candidly about those misfortunes via stand-up gave her career new life, and this year she's gotten engaged, released an HBO special, been the subject of two documentaries, and cut a deal with Amazon for an original series. Will success spoil Tig Notaro? Hardly. What hasn't killed her has made her sharper.

Sat., 1:40pm, Yellow Stage
From the man who gave us The One Hour Comedy Festival, F*cked Up Show & Tell, and STONED vs DRUNK vs SOBER comes a show built on a foundation of unpredictability. You may know the comics and improvisers onstage, but you probably won't guess what they're going to do. Sketches? Interviews? Cook?

Sat., 3:30pm, Yellow Stage
Sat., 11pm, The New Movement
Lesbian. Muslim. Canadian. The host of My Sexy Podcast has a lot in her background to deal with, but if you don't like her, then, as her website notes, "you're probably racist." The self-described "professional socializer" has a winning way with sharp material.

Sat., 10pm, The New Movement
Sun., 2:20pm, Yellow Stage
She may be petite and as fresh-faced as the carrot top on the Wendy's sign, but this Queens redhead can drop some dope raps, as she proved in her breakout turn on Girls, where Emma Carroll was working as a PA when Lena Dunham put her alter ego on camera. Now she's taking her frank, and frankly hilarious, raps live.

Sun., 4:05pm, Yellow Stage
NOLA bounce queen Big Freedia, who led some hardcore azz-shakin' at previous fests, is back again to make sure everybody's booty is hard at twerk.

Sun., 4:40pm, Yellow Stage
You think you know what it means to party? Well, look to be schooled by the man who's been urging us to "Party Hard" since 2001. The bloody-nosed rocker of I Get Wet fame comes to FFF in motivational speaker mode to inspire you to celebrate life. 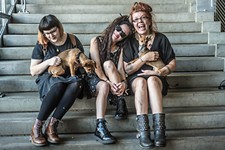 Friday Fun Fun Fun Fest Interview: Babes in Toyland
The Babes are back in town