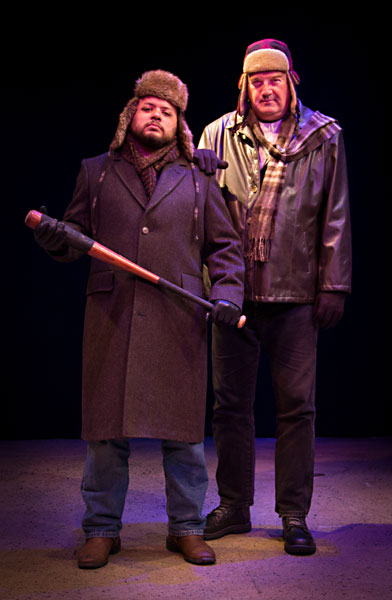 Society's underbelly has always fascinated us, and we do love our tough guys. Many a playwright has taken a whack at the seedier side of humanity – mostly gentleman scribes, it should be noted. With The Norwegians, Austin playwright C. Denby Swanson flips the script. Instead of asking us to find redemption in the heart of a villain, she challenges us to believe two charming and bumbling fellows are even capable of murder.

Tor (Michael Stuart) and Gus (J. Ben Wolfe) are hit men. Nice hit men. Norwegians. Minnesota Norwegians. Stuart and Wolfe have perfect chemistry, exhibiting a Laurel-and-Hardy-esque dynamic with a hellish twist. They begin the play by grilling Olive (Claire Grasso), a Texas native, over the details of the job she has for them: doing in her ex. Tor looms over them with wide, wise eyes, often more concerned with the marketing side than the actual wetwork, while Gus feigns bravado (quickly vanishing at the mention of his own ex, Betty). The set by Mike Toner is perfectly proportioned: Tor and Gus' modest hideout (hunting cabin?) sits on one side of the stage, and the back corner of a Minnesota dive bar sits opposite. In between is nothing – a dark void possibly representative of the fear and emptiness each character has yet to admit possessing. Joel Mercado-See's sound design employs a whipping winter wind each time Olive whisks between her present meeting with the hit men and her recent bonding session with Betty (Boni Hester) at the dive bar. Betty is another Southern transplant, and they have much in common – mostly their poor choices in men (and how they should have them killed), with a bit of complaining about the harsh climate of Minnesota.

Swanson's script is linguistic honey peppered with topical pop-culture references and geographical in-jokes. Her prose combines Will Eno's love of language and Neil LaBute's accessibility to commonplace savagery simultaneously. Most inspiring is the agency given her heroines. Grasso's Olive is out of sorts and out of place in this strange frozen Oz, but is always in charge of her destiny, fully embracing every choice, every moment of strength or vulnerability. Hester, who begins Act II with an applause-garnering soliloquy, never misses a beat with her perfect drawl and Kentucky attitude. These women may not always make the right choices, but the choices are always fully theirs.

The Norwegians is a comedy, despite its subject matter. Swanson and director Lara Toner Haddock have the characters embody the antecedent of the plot device typical of the genre. In a way, the environment is the foil for all the characters, rather than the tasks at hand. Mercado-See's sound, Toner's set, beautifully dreary lighting by Don Day, and exquisitely researched and understated costumes by Glenda Wolfe all combine in sensory magic. It is comfortable in Austin Playhouse, but the design elements – and the actors' endowment of the suggested elements – make us feel just as cold, trapped, and alone as they do, even while being warmed by the charm of our polite assassins. Tor and Gus embody the very essence of the dread polite Midwest and seem genuinely confused when their actions are regarded as abnormal by our Southern heroines. "We're Norwegians," is Tor's typical response. None further is given, nor is any necessary.

In a town that (often incorrectly) considers traditional theatre boring and dated, replacing it with more experimental and avant-garde fare (which doesn't always work well), Swanson and Toner Haddock give us a bit of well-made absurdism that never flails wildly into actual absurdity. It is a poor critic who kills the surprises, but a random interpretive dance number falls perfectly into place, not at all disjointing the narrative. With a keen director's eye and engaging storytelling, this cast, crew, and design team deliver a blast of cool refreshment and all-around fun, with a hint of danger just below the ice.