The 2015 class of the Austin Arts Hall of Fame 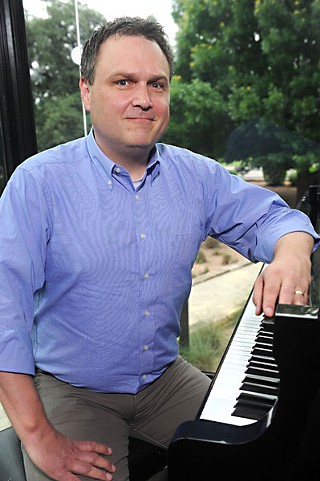 "Go make music." Long before that simple directive became the sign-off to every Biscuit Brothers program, Allen Robertson was living it. The ever-active, productive music director-composer-performer came to Austin in 1989 to obtain a master's degree in children's theatre and soon started scoring family-oriented plays at the University of Texas and Second Youth Repertory Family Theatre – original adaptations of Dr. Jekyll and Mr. Hyde, Beauty and the Beast, The Bremen Town Musicians, and The Steadfast Tin Soldier, among others. That led to many music directing gigs – at the Zilker Hillside Theater for the summer musical, Live Oak Theatre, and Zachary Scott Theatre Center – so many that at times he seemed to be the only music director in town. At Zach, Robertson teamed with Artistic Director Dave Steakley on a notable string of contemporary musicals, from the breakout pop revue Beehive and its successors Forever Plaid and The Taffetas to rock musicals such as The Who's Tommy; Love, Janis; The Rocky Horror Show; Hairspray; and Hedwig and the Angry Inch to acclaimed shows such as Dreamgirls, Avenue X, Ruthless!, The Gospel at Colonus, and Robertson's own Jouét, which premiered at Zach and then was staged at Actors Theatre of Louisville. In more recent years, he has handled music direction duties for Zach productions such as Ragtime, Les Misérables, Spring Awakening, and The Drowsy Chaperone while continuing to develop more original musicals – his Stone Soup, created with Damon Brown, was just nominated for Outstanding Musical at the 2015 Austin Critics Table Awards – and, of course, serving as one-half of the Biscuit Brothers. In this last role, Robertson (Buford Biscuit) and partners Jerome Schoolar (Dusty Biscuit), Jill Leberknight (Buttermilk Biscuit), and Brown (Tiny Scarecrow) have nurtured a love of music in thousands of young people through their two-time Emmy Award-winning PBS series, countless live appearances, and the recently developed Biscuit Brothers Fine Arts Farm in Oak Hill.