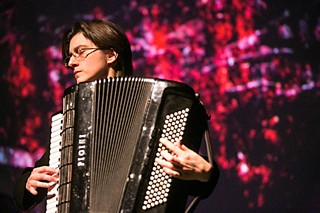 
We all know that a good book can transport its reader, but what about the story of the book? The Sarajevo Haggadah is a manuscript with a fascinating history: It was made in medieval Spain, survived the 1492 Inquisition, ended up in Venice, then Sarajevo. The book was then spared twice more in recent times: first from the Nazis in World War II and then from shelling during the 1990 Bosnian War – both times preserved, interestingly, by Muslim librarians. Accordionist and composer Merima Kljuco crafted an accordion-and-piano score that loosely traces this book's torrid yet miraculous journey.

The Haggadah's history holds particular resonance for Kljuco, a Bosnian refugee from the 1990 conflict. The layers of parallelisms intertwined in this production were satisfyingly rich. The story contained in the Haggadah itself – the liturgical text for the Passover seder – recounts the story of the Jewish exodus from Egypt. Is this production a story of the Jewish people leaving Egypt, or of their latter expulsion of Spain? Or of the book's journey across Europe? Or of Kljuco's flight from Bosnia?

The concert began with a long silence – the sound of the "nothing" before the creation of the Earth. Then the accordion's bellows began to breathe, signaling the genesis of the creative work itself. In this opening section, the sensitivity of both Kljuco and pianist Seth Knopp was, in a word, transcendent. The duo then wove through regional folk styles that evoked the book's past, such as Sephardic melodies and Bosnian song. Kljuco was particularly brilliant with the Klezmer-style music, which somehow managed to have both precise and carefree rhythms, and a great sense of sardonic humor. Then the music shifted to the war theme, signified by a relentlessly violent section of rumbling low piano with tight dissonances, which Knopp played with power and incision. The music alternated between these folk and conflict elements until it finally resolved into a peaceful send-off. Throughout the performance, the fierce concentration of both players was palpable, especially in the silences between sections.

Kljuco collaborated with video artist Bart Woodstrup to create animations for the production. Many of them were taken directly from the Haggadah's illuminations, vivified with subtle movement. The video was elegant in the opening creation section, as the forms slowly evolved from a simple line into the colorful world replete with plants and animals. In the latter part of the work, however, some of the video elements were jarring and contrived; the images of marching Nazis and the historical photograph of the librarian jolted the experience into the specifics of a history lecture – counter to the metaphysical space that the musicians had so stunningly created.

The Haggadah itself is a testament to the power of coexistence; so many diverse people over centuries helped to protect this book, which was created in Spain's Convivencia, a period of relative harmony among Jews, Muslims, and Christians. Kljuco describes the climate in Bosnia pre-conflict as a similarly open period for cross-cultural exchange. This artistic work was an appropriate culmination of this wonderful object – its rebirth and transposition into yet another presentation of the exodus narrative. The compelling performance was equal parts music and prayer: May we return to convivencia, amen.