What with all that presses on us in our daily lives – work, traffic, bills, the heat, you name it – most of us have little time to ruminate on the wonders of the natural world and universe. Which is what made the Texas Choral Consort performance of Franz Joseph Haydn's The Creation so welcome. Here was an opportunity to set aside the myriad mundane distractions of existence and concentrate on the heavens and Earth and life populating them in such immense variety. The composer was clearly in no hurry to spin out his musical version of the first seven days told in Genesis; the 33 movements took a full two hours to perform. But the beauty of Haydn's expansive approach is that it covers the creation in such breadth and detail – "the all-refreshing rain, the devastating hail, the light and flaky snow"; "towering summits," "ample plains"; proud eagles, caroling nightingales; roaring lions, leaping tigers, bounding stags; grazing cattle, swarming insects, even creeping worms – that one's sense of the scope of life, its grand diversity, is reawakened.

And the beauty of the TCC performance was how personally that appreciation of this creation was conveyed. As embodied by soloists Suzanne Ramo, Bradford Gleim, and Steven Soph, the angels who narrate this formation of all things felt less like celestial messengers proclaiming holy writ than astonished witnesses to a miracle. Their musicality was virtuosic, their diction impeccable, and yet informing every solo was a forthright quality of "I was there; I saw this," with the singer seizing on a word that signaled the angels' loving wonder at their Maker's achievements, as when Ramo, singing of the turtledove, lingered on the word "adoring" so tenderly that it described her as much as the bird. In the massed voices of the choir, under Brent Baldwin's masterful direction, one could hear a similar enthusiasm and amazement, their alleluias loud and rousing, every utterance of "God" resounding with special joy. And Kirsten Watson and Chaz Nailor were as cheerful, glowing, and thankful an Adam and Eve as Eden has seen, beaming at each other like newlyweds and giving full feeling to the line "with thee is every joy exalted."

Haydn ends his masterwork with no mention of a Tree of Knowledge, serpent, or Fall, and how fortunate for us that he did. So much attention has been focused on that failing of humanity, on our bringing sin into paradise and being cast out of it, that it overshadows the wondrous work that came before. In freezing the frame in a moment of unbridled happiness and rejoicing, Haydn lets us re-enter the world full of admiration for all the life inhabiting it. As with "Without Form and Void," Austin composer Dan Welcher's engaging new prelude to The Creation, which began with an aural simmering of choral murmurs, bows bouncing off strings, and crystalline tones made by fingers circling glass rims, then resolved in pitches and harmonies, the Haydn celebrated the coming of life. "Renewed is all the earth, refreshed its charm and might," sang Texas Choral Consort, and so we who heard that word were. 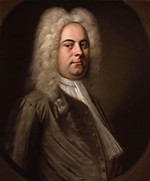