This new musical looks to put a fresh spin on the familiar Land of Oz, but the storytelling isn't always clear

It is easy being green: Jomama Jones as Ozma (Photo courtesy of Salvage Vanguard Theater)

These were all things that I expected to experience at Bright Now Beyond, playwright Daniel Alexander Jones and composer Bobby Halvorson's new musical adaptation of The Marvelous Land of Oz. And the world premiere production from Salvage Vanguard Theater does deliver them. Shadow puppets feature prominently on the shimmering curtains that constitute most of the set, for instance, and splashes of light bedazzle the environment and imaginative wardrobe.

Yes, the world of Oz is certainly set forth in fanciful fashion by SVT, providing a breath of fresh air that both breaks from and pays homage to the Oz of MGM's iconic film, its foothold firm in American popular culture. But, as is the case with many – maybe even most – shows in their initial public presentation, the storytelling needs some intense focusing.

As I left the theatre, I tried hard to connect the dots between the vignettes I'd just seen onstage. The production's frame and curious score had so intrigued me that I yearned to make sense of the story that accompanied them. In the end, an Internet search for L. Frank Baum's second Oz book proved necessary for obtaining the road map. That's not to say an adaptation should faithfully reflect every moment in the source material; some of the most phenomenal theatrical adaptations occur when an existing story is viewed through a new lens.

And so many elements of this new musical attempt to do just that: to look at Oz in a new way without losing the nostalgia of the 1939 film that exposed most of us to Oz in the first place. Adults and kids both will find aspects of the show challenging – gender themes for the former, and for the latter, a child having to make an especially tough decision. This is somewhat heady material that's treated with tongue in cheek at strategic times and poignancy at others. But without a clear through-line, after many of the scenes I was left wondering, "What just happened?"

With some additional workshopping and focused work on the script and lyrics, Bright Now Beyond has the potential to be a major player in the theatre world – especially if marketed to families. As it is, with some of Austin's most notable talent onstage (full disclosure: the cast includes Chronicle Arts Editor Robert Faires) and an impressive eightpiece band providing the instrumental lines of Halvorson's remarkable score, the show is alive with energy. You can be one of the first to experience a show that could become something big, but you may want to familiarize yourself with The Marvelous Land of Oz before heading to the theatre. 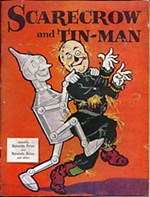 All Over Creation: Glory Days
When is gazing back at the past looking in the wrong direction?