The artist's comparison of war and violence with spectator sport holds promise, though not all the work is equally strong 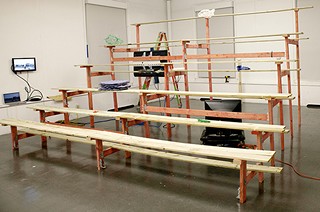 
Kasey Short's solo exhibition sets up a loose comparison of war and violence with spectator sport and other American institutions. The work is obtuse, though not without promise. Short is digging into some unlikely topics here and making interesting connections along the way. Unfortunately, he also makes some missteps typical of artists in the grips of academic scrutiny. Short is entering the second year of the graduate program at University of Pennsylvania and is implementing in this show the oft-used sleight of hand that replaces conceptual weight with obscurity and bewildering symbolism – the postgrad equivalent of changing fonts to boost the page length of a high school term paper. Still, the show's central points hold merit, and if viewed as a work in progress, "5 Plus Hearts" remains of interest despite its loose ends.

Atrium Stadium is a set of rickety, timber-frame bleachers, along with audio, video, and small sculptural elements. Combining action-movie soundtrack from Bloodsport with audio from a pep band, the work quickly brings to mind our culture's parallel fixations with competition, violence, and domination. The visuals follow suit, depicting, among other things, antics performed in an empty parking lot. Dressed in construction worker's attire, the protagonist dramatizes sports, work, and battle, crawling from the trenches of one Dumpster to the next and screaming agony along the way. The hard hat resembles a soldier's helmet, the steel-toes resemble combat boots, and the drill a pistol. The McDonald arches and other symbols of corporate America in the background are pulled into the comparison, becoming national banners in the campy one-man war.

Atrium Stadium's elements add up to something compelling, something with a few entry points for the viewer. However, the rest of the artworks seem so much less powerful than, and tangential to, the central themes produced by the large installation that their inclusion is unnecessary: hastily glued and painted collages, quickly considered sculpted versions of the same, intentionally low-quality digital prints, plungers made of clamp lights and copper tubes, a collection of doorstops, etc. It's not that open-ended exhibitions are a bad thing (in fact, the opposite is true), but this show goes beyond producing a few questions to linger with, instead obfuscating its own purpose dangerously close to the cliff edge of meaninglessness.

But this is where a student artist who is serious about closely examining his practice should be, that is, bravely feeling out the edges of successful delivery of meaning to a wide range of viewers. It is for this reason that I look forward to seeing what Kasey Short is up to in a year's time, MFA in hand.