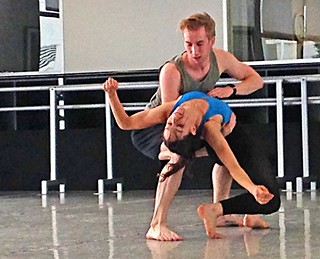 The duet that Michelle Thompson and Oliver Greene-Cramer are rehearsing, in a Ballet Austin studio lit by mid-morning sun in May, is tender and organic. Both dancers are barefoot, and Thompson's brown hair, in a long, damp ponytail, cascades over one shoulder. They pursue each other from one side of the studio to the other, rarely breaking touch. It's clear that everything between their characters is not all right, yet in a soft way – maybe in an everyday way. This is not to say that the movement is commonplace. In contrast, it's rare, this grace-over-grappling.

The duet is one segment in choreographer Jennifer Hart's "Variations on Surrender," which will be performed with two other works by Hart as Ignite, the inaugural concert of Performa/Dance. Founded by Hart – who has choreographed work for Ballet Austin II and is on the faculty at Ballet Austin Academy – and Ballet Austin dancer Edward Carr, the pickup group utilizes the talents of off-contract Ballet Austin dancers. Hart has worked with the dancers – Carr included – for several summers, collaborating, developing work, and staging informal showings. But as this summer approached, Hart and Carr felt the time was nigh to formalize their work. With the group – which is attempting funding through Kickstarter (www.kickstarter.com/projects/433539469/performa-dance-presents-ignite-three-works) – Hart and Carr hope to contribute to a richer ecosystem for choreographers, dancers, and audiences. They'll produce Hart's work as well as dances by other choreographers. After all, Carr confides, the dancemakers who visit Austin as finalists in Ballet Austin's biennial New American Talent/Dance competition routinely mention that they would love to work in Austin – if only there were work.

Though it's true that Austin runs scant in several ingredients for dance – dancers, venues, and audiences – Hart and Carr pay homage to the now-defunct Califa Arts Collaborative, a ballet dancer-run summer initiative, and American Repertory Ensemble, directed by David Justin at the University of Texas, and give props to our city's independent contemporary choreographers. Hart cites the success of Fusebox Festival, Austin's 10-year-old performance binge, which draws international artists, as evidence of an appetite for risky work. Her vignettes in "Variations on Surrender," three years in the making, have a theatrical bent, with improvisation and vocalization. In informal showings of the work in progress, dancers and audiences seemed to connect to the narratives in the vignettes, but the work as a whole evinced something larger.

For Hart, it's a bit of a departure: "This feels very different, in a very exciting way." Things are exciting for Hart in other ways, too. Several months ago, when Hart mentioned the idea for the performance to Ballet Austin Executive Director Cookie Ruiz, Ruiz said, "Wait. There's something in the works." "The works" turned out to be a breakthrough commission for Ballet Austin: Hart will create a ballet for the company's March "Director's Choice" program. But, lucky for us, she has a rebellious streak. She didn't wait, and now we have more chances to see her work.