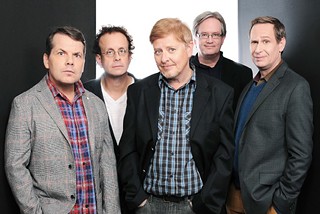 What Monty Python was to the Seventies, the Kids in the Hall was to the Nineties: a troupe of exceptionally smart, gifted, irreverent guys who came out of nowhere and promptly rewrote all the rules of sketch comedy. The Kids' breakout series, produced by Lorne Michaels and airing on HBO and CBS, won the five lads from Canada – Dave Foley, Bruce McCulloch, Kevin McDonald, Mark McKinney, and Scott Thompson – instant cult classic status in their neighbor to the south, through characters such as Mr. Tyzik the "Headcrusher," gay icon Buddy Cole, the Chicken Lady, irascible Cabbage Head, Sir Simon Milligan and his evil manservant Hecubus, and many others, in and out of dresses. A leap to film in 1996 tanked, but that effort, Brain Candy, actually earned the Kids new generations of fans through reruns on Comedy Central. The troupe has since reunited for a miniseries, Death Comes to Town, and occasional tours. The most recent of the latter brought the Kids to Austin in 2008, and on the strength of some successful stage shows in Toronto last fall, the troupe accepted Moontower's invitation to perform. The Chronicle spoke with Kevin McDonald about the Kids' return to their stage roots.

Austin Chronicle: Is your rehearsal process any different than it was back in the day?

Kevin McDonald: It had to evolve over the years. We had a definite way to rehearse and write during the early days when we were a stage troupe, then it had to evolve a lot when we were a TV troupe. And when we were doing a movie, it really changed a lot. We're going back to the original stage days – well, actually, no, that's not true, it's a mix of TV and stage. Sometimes we bring fleshed-out scripts, or sometimes we write in the rehearsal hall.

We do things painfully and slowly, so what'll happen is – and this is the way we always work – we'll read the scripts, and everyone will have lots of ideas, and we'll make a lot of changes, and whoever is our script assistant will feel frustrated [laughs] at the end of the day for scratching things out and putting things back in, and putting something in, and one of us going, "No, that's stupid, don't listen to Scott," and things like that.

AC: What percentage of pieces is brought in by one writer and what's collaborations by two or more of you?

KM: Oh, that's interesting. Nowadays, it could be almost 50/50. Or maybe ... no, that's not true. I would say 60% written by ourselves and 40% collaborations. But then again, even the stuff we write by ourselves, like Bruce and I are prolific, before we sit down and write it, we'll call each other and run it by each other and help each other with ideas, so even writing by ourselves is a collaboration. And when I'm writing something, I will always text Dave for jokes.

AC: Do you prefer having someone to bounce things off of?

KM: Oh yeah. That's the secret of good comedy. All the best sitcoms, the best sketch shows, are always because the collaboration was good. And I think that the reason we're who we are – whether we're successful or not, I'm not sure – is because the five of us work really well together. We have a combination of the same mindset yet different mindsets. We think in the same ballpark, but we play different positions, to use a bad baseball analogy. So we have a chemistry, where we think in the same universe, but we bring different things to it.

AC: So when you're in the rehearsal room and a sketch is in development, what's your strength?

KM: I think I'm really good at knowing when a good idea comes by. Like "Headcrusher" was a throwaway for Mark, and I said, "No, no, no. That's a good idea." And the other thing is that I'm good at adding. The others are good at starting – though when I write by myself, I'm fine; for some reason, I'm a little shy even with the Kids in the Hall – I find my talent is more when someone says something, I can add to it, and then we're doing a dialogue, and 10 minutes later, we've written a sketch by talking back and forth.

AC: Are you guys any more politic with each other than you used to be, or is it like now that you're cranky old men you're more eager than ever to shoot ideas down?

KM: [Laughs] We're a lot politer than we used to be. Now that we are 50-year-old men, we're so much politer. You know, when you're a young man working in a group, you sort of think it's your job to be an asshole and get what you want, and now we still think we should get what we want – we're all egomaniacs who think that – but there's a better way of getting it. So I'm not going to insult Scott's childhood or father, I'm just going to calmly say why and persist why I think my idea's good. The fire of us thinking our idea's best hasn't died, but we are politer as we age.

AC: Is being back onstage more fun than the filming was? Do you have a preference for film or stage?

KM: I can't speak for all of us, but I think the general consensus would be that we do better work on film. Even when we were a TV show, 75% was taped in front of a live audience, and 25% of it was films, and that was our favorite parts, 'cause you'd have control over it, and we're control freaks, as most comedians are; the more you control, the better you think it is. To really answer your question, it's way more fun onstage. The thing is, you're having fun, and you can change things, and you know you're with a partner, whichever one of the five it is, who's going to go along with it. But it dies. Later in your hotel room, that great feeling, it's gone. It's fun, but it dies quicker. Film stays forever.

AC: But the fans are always still there. To me, that's one of the remarkable things about your troupe, about Monty Python, about a lot of the great comedy groups: Their memories of the work are so strong that when you come out onstage, it's this eruption of love. People start laughing before you ever do anything.

KM: I know, I know. It's a little freaky. In the backs of our paranoid minds, we keep expecting it to stop. And the freakiest thing is that the audience stays the same age as we age. When our show first aired, it barely made an impression. It was the four years that we thought we had quit, after our movie Brain Candy, it was run on Comedy Central the whole time, that's when we built our audience. So when we did our first big, big tour, it was like 11 years after we started the show, and our audience was young and way bigger than ever. Now because of repeats or YouTube or Netflix or whatever, the audience stays the same age. They're all 32 and have mustaches.

The Kids in the Hall perform Friday, April 25, 9:30pm, and Saturday, April 26, 7pm, at the Paramount, 713 Congress. For more information, visit www.moontowercomedyfestival.com.

2010 Out of Bounds Comedy Festival
A banquet of yuks, more welcome than ever