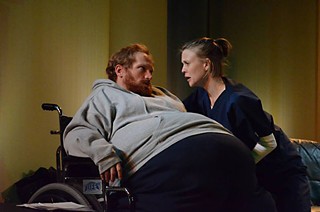 
Moby Dick is no stranger to the stage. The Melville classic has been "rehearsed" by Orson Welles, tumbled through in an Actors Gymnasium/Northwestern University co-production, and even set to song as a musical. But chances are you'll never conceive of Moby Dick in the same way again after attending The Whale, currently plumbing the depths in A Chick & a Dude Productions' Texas premiere of Samuel D. Hunter's play.

A surprise is in store upon entering the famously intimate Hyde Park Theatre, where instead of the waves and sea creatures you might expect given the show's title, you face a cluttered living room. Opaque panels by set designer Michael B. Raiford, subtly backlit by lighting designer Jason Amato, frame the space – and wonderfully so (especially in the case of Amato, who throughout the evening provides some of the finest lighting of his I've seen). Piles of stuff are strewn about the upstage area, with a couch center stage that will be the focal point of our attention for the next two hours. What unfolds on and around that piece of furniture is a tragedy of much depth, albeit one laced with dark humor.

I don't want to give away too much of the plot, as it is best discovered in person. Suffice to say that lead actor Shanon Weaver (the Dude in A Chick & a Dude) portrays a homebound invalid at the end of his life. As the assorted friends, old and new, who visit him, actors Erin Barlow, Jon Cook, and Elizabeth Mason support Hunter's weirdly voyeuristic glimpse into a man at the end of a journey, examining the myriad topics that flash before his eyes. Estranged teenage daughter Ellie (played with utmost angsty flair by Kayla Newman) adds a biting cynicism to the proceedings, and we're not sure whether to wince or snicker at her remarks; most often, we respond with a combination of both. The whole cast gives truly strong, high-caliber performances, but Weaver delivers nothing less than a tour de force turn. Playing a character in various stages of death over a two-hour span is no small feat emotionally or physically, and I can't remember witnessing a more textured and realistic portrayal of a palliative process onstage. Weaver's work in creating his character's arc must have been intense.

The thing that's so impressive about A Chick & a Dude's production is the craft behind it, with the keen eye of director Melissa Livingston-Weaver (the company's Chick) evident throughout this tightly realized whale of a tale. 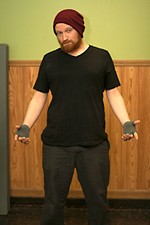