This dance work morphs, mixes, and disorients constructs of what's typical and atypical in movement 
South Congress and Monroe, Saturday, 1pm. We were lined up against the building behind Cap Metro's sleek new bus stop, watching four black-clad performers: one folded at the waist over the railing, one crouching behind it, one raising one crutch toward the sky, one staring at an imaginary watch. None of us were waiting for a bus. We were waiting to see what happened next, and the performers were waiting for our contexts to expand enough to let them in.

It happened, via the slow, subtle changes in their vignette, familiarity being the great leveler. When you repeat a word over and over, it loses the sharpness of its meaning, freeing you to notice its sounds, its qualities, your accent. When typical body positions, movement qualities, and utterances cohabit long enough with atypical ones, the sharpness of "difference" weakens, broadening what we effortlessly accept. Bodies in (Public) Space, conceived by Lucy Kerr, morphs, mixes, and disorients constructs of what's typical and atypical. Kerr's performers – whose first rodeo this was not, as most of them practice and perform mixed-ability dance with Body Shift (a collaboration between Forklift Danceworks and VSA Texas) – were intense and open.

When they left the bus stop, we followed, in a sidewalk trek that scooted by tables at Güero's and cruised by the interminable queue outside Hopdoddy, all the while disarranging locomotion and the language associated with it. Pauses for movement exploration and rule-breaking – dressing in public, crumbling muffins, sharing apparatus – suggested someday-freedoms from the constructs of "normal." Wishes aside, it still felt trite when an able-bodied performer appropriated the movements and behaviors of disability. What's most interesting is not what's different or the same, but what is new. 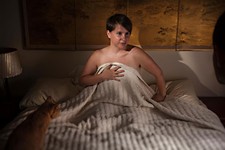 Change of Venue
This year, FronteraFest is takin' it to the streets – and a chapel, a bookstore, a home ...