Natalie Cox (Fri., 12:15pm) One Dick Joke a Day writer. Exhibit: "I named my dick squirrel because it's always hiding my nuts."

Rob Gagnon's One Hour Comedy Festival (Fri., 1:45pm) A who's who of generic comedy archetypes, including: "Stoner Comic," "Some Asshole With a Puppet," and more.

Judge G-Su (Fri., 3:15pm) Sketch/improv hybrid from the New Movement, in which comedic verdicts are rendered.

Matt Bearden (Fri., 4:20pm) Erudite Austin comic and radio personality in no mood to dumb it down.

Norman Wilkerson (Sat., noon) Stand-up vet/co-founder of the Austin Comedy Trainwreck and owner of "a cat that poops on him."

Chris Trew (Sat., 1pm) Comedian/amateur rapper/co-founder of the New Movement; packs a lot of weird in the beard.

Veggie Hot Dog Eating Contest (Sun., 12:30pm) A gallery of meat-eschewing gluttons inhale all the veggie dogs they can stomach for the ultimate prize: wholesale ostracism.

Chris Tellez (Sun., 1:30pm) Austin-transplant from Dallas who keeps his sets tight "because he has a baby in the car." 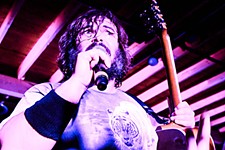