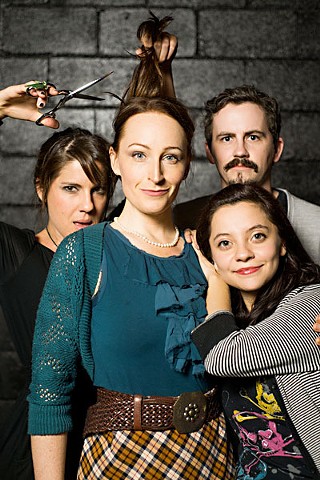 Stall in the family: the cast of Three, or the Sound of the Great Existential Nothingness (Photo courtesy of Will Hollis Snider)


If you're not a theatre person, you might wonder why theatre companies revive Anton Chekhov. I'm a theatre lover (to be distinguished from a theatre person who lives and breathes theatre and is involved in it, at least on an administrative level), and I wonder about Chekhov revivals. They're so ... provincial (and long, and boring). But then I also don't (blasphemer alert) go in much for Shakespeare, either. Kill your heroes, Artaud wrote (in some fashion or other), so I slayeth thee William, if that is your real name, for the sake of contemporary theatre. Artaud, vous aussi. And Chekhov? Well, Breaking String Theater has blown some life into that old corpse, hasn't it?

Three, or the Sound of the Great Existential Nothingness is not a revival. It is an adaptation of Three Sisters, significantly pared down from the source material, modernized and surprisingly funny, even if much of the humor comes from our awareness that we are watching theatre. We're not quite sure when the play begins, but according to the script it begins when Andre (Jeff Mills) asks us to turn off our cell phones and then waits for us to do so. He pretends to get angry at an audience member and then makes as if he's going to throw a chair at him, saying "I would not do that. I would not hit this person. I was acting. Forgive me." He turns and says, "Does anyone need exposition?"

For me, the play begins here, because this question assumes that some of us don't need exposition – we are Andre's contemporaries, come to hear the details of a story we already know. But we are not his contemporaries, and so we are watching, removed, as Andre performs for an initiated audience seated invisibly among us.

He continues: "I have three sisters; Olga is the oldest, she's a schoolteacher and often fills in for the school principal ... Masha is our middle sister, violent temper ... my youngest sister is Irina, and she is very innocent." A decade ago, the four of them moved to an unnamed rural wasteland with their father, who blew all their money and died. They are hopelessly out of place, unable to adapt or to flee. The play takes place on Irina's 21st birthday, when an out-of-town guest surprises them.

The play relies too heavily on offstage action to propel the narrative, the actors being forced to react to events that are hard to imagine and people we don't know, whereas exposition of those events would have kept viewers present with Andre. He feels real, especially the way he finally walks offstage, ending the play because it has to end, not because it has a conclusion. He's done acting.