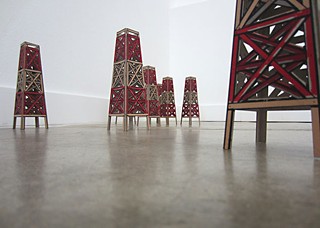 
"The 2013 Tiny Park Drawing Annual" is a shake-up, a needed reminder of the possible intersections and interdependencies of form and content that provides an expanded lingua franca for the artistic practice of drawing.

The lifework of Austin's Claude van Lingen, collected under the name 1000 Years From Now, demonstrates a process that destroys the work as it reaches its maximum intensity. Van Lingen writes names, under headings such as "Religions of the World" or "Countries of the World," with graphite on paper until the paper disintegrates. The effect on the viewer is similar to that of Kafka's "In the Penal Colony," in which prisoners enter a machine that tattoos them with a word representing their crimes until it kills them.

David Culpepper pushes the idea of drawing into sculpture, producing work that literally brings engineering and architecture off the page. The foremost example would be R.T.D., a collection of radio towers screenprinted on chipboard, cut, and assembled. In the four pieces tacked to the gallery walls, structures drawn in marker and pencil have been cut out of paper, with at least one edge remaining uncut. In two drawings, those points of connectivity merely recognize the source material, but in Cassiopeia and Hercules the plane provided by the paper links the physical structure pouring out of it to heavenly bodies drawn above, suggesting the difficult proposition of viewing the ethereal and the corporeal through equal measures.

Calixto Ramirez's piece Linea en el paisaje II, being a MiniDV NTSC video, pushes the boundary of drawing the furthest. The Mexico City-based artist has depicted a rocky landscape, ocean in the distance, and a human figure waving or pointing. Translated as A Line in the Landscape, the piece seems to be an attempt to capture evidence of the elusive perfect line somewhere in nature, in this case formed by the horizon appearing in a dip between rock formations.

Returning to the page, University of Texas lecturers Sara Frantz and Rob Verf provide distinctly different views on landscapes. Frantz emphasizes human-made structures that cut through nature, by drawing around them. The graphite on paper works depict the buildings as negative space in the midst of finely detailed surroundings, while Cantilever I, using gouache and graphite, emphasizes the structures with bright colors cutting through trees.

Verf creates satellite images out of coffee "spills," acrylic, and pencil. The collection, titled Landscape in a Figure, has an infograph feel, but the works are abstract suggestions of landscapes.

If we were to search for some kind of thesis in the exhibition, then we might find it not in range of technique, but in degrees of abstraction – the concept of drawing changes with the idea it's trying to express, the ideas naturally being the impetus to test new methods.