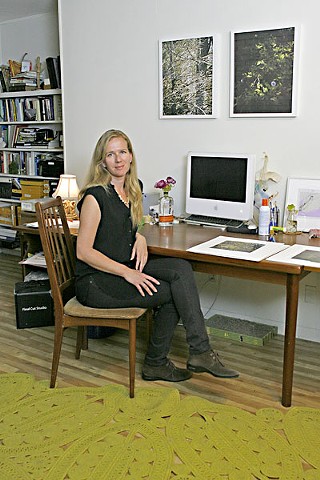 Elizabeth Chiles in her studio (Photo courtesy of Lily Brooks)

"Though it took a lot of work, I'm pretty happy here now," photographer Elizabeth Chiles proudly says of her Enfield apartment. "The normal place to have a living room is my studio." Lit by a photographer's lamp, Chiles' work space is full without being cluttered. A metal flat file, raised from the ground, sits catty-cornered to Chiles' substantial photo printer. On her worktable, the requisite desktop Mac is surrounded with craft supplies and books. Most things in Chiles' apartment – and this extends to her photography practice as well – have a relationship with the natural world: indoor plants, an Eadweard Muybridge Animal Locomotion print, vegetal curtains, and Luther (a charming, vocal cat). She is also a member of the Lakes Were Rivers collective, a group of 11 artists working primarily in photography. On the day I interviewed Chiles, she was preparing to drop off work for the collective's summer exhibition at the Harry Ransom Center.

Austin Chronicle: Did this exhibition come out of the show you all did for the East Austin Studio Tour a couple of years ago? How did it evolve?

Elizabeth Chiles: At our Lakes Were Rivers meeting, someone suggested doing something with the HRC. We asked the curators if we could each pick an image from the archives to pair with our own work. They said yes. It wasn't really a big deal.

AC: Well, I thought it was kind of a big deal. I remember running around EAST and thinking there wasn't much weight to what I was seeing. A lot of independent artists selling their own work, which is great, but nothing with an internal ownership and sense of how their work hooks into histories of image-making. You guys were doing that; that's a big deal.

EC: I guess I didn't consider it such a privilege. We took the work from that first show over to the HRC, and the curators agreed on the spot to a show. When that happened, that's when it hit me! To begin work I started by looking through HRC's archives and found the early papers of John Herschel, who conducted investigations on light, color, and crystals, and early photochemistry. I was also looking at drawings of sacred geometry by Elsa de Brun. I've always been interested in light and our perception of it, and issues of causality, patterning, and mimesis.

AC: Are there going to be works from the archives hung right next to works that the collective creates?

EC: Instead of diptychs, a lot of stuff will be off the wall in groups or vignettes.

AC: What was it like relocating your practice to the Reading Room of the HRC? That's a very specific space – quiet and reverent. Lots of studious folks.

EC: My experience at the HRC felt very intuitive. It's as if I had to hit the door just right or know the secret pass code. Sometimes I would stumble upon something even more interesting than I had set out to see. I would casually make notes about the things I found, and then, a week later when I went back, I couldn't locate them again! In some ways, that's analogous to working in the studio. I have these moments where the path to creating what you're working on seems to simply unfold – and at other times, you can't really find how to get there. Looking through the archives felt physical; I was imagining vaults and tunnels.

More of Elizabeth Chiles' work can be found at www.elizabethchiles.com. Chiles will exhibit at 2313-B Shoal Creek during the West Austin Studio Tour, April 27-May 5. Lakes Were Rivers' exhibition "Contemporary Photographic Practice and the Archive" opens June 11 at the Ransom Center, 21st and Guadalupe. 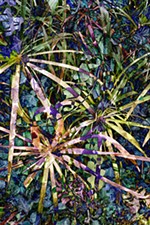