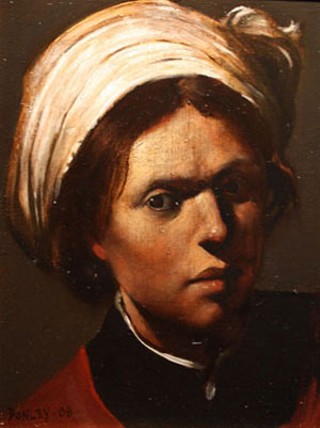 Figure With White Cap (No. 48) by Ray Donley

The figures on his canvases look as if they were painted hundreds of years ago, but they are recent creations, some brand new. The paintings they appear in are shown across North America and Europe, but they're made here in Austin. And the story behind them is being told in a new documentary, Ray Donley: Dancing the Inquisition Waltz.

It's rare that an Austin artist is the subject of a film, but then Donley is something of a rarity himself: a painter who's also a degreed art historian, a contemporary artist working in a centuries-old representational tradition, an artist who has found international success yet chooses to live and work in Austin, the city of his birth. "People say, 'Ray, why don't you move to New York and be a bigger artist?' I say: 'No, I'm happy here in Austin, Texas. Anybody can move to New York and make it. It takes a real artist to make it in Texas.'"

Donley is making it, routinely showing and selling his work in Berlin, London, Amsterdam, and so on, but the flip side of that is his work is rarely seen in his own hometown. That makes this month's showing of "Ray Donley: Still Awake in the City of Dreadful Night" at the Russell Collection Fine Art Gallery a special treat. The exhibition, which is showing through March 20, naturally features many of those enigmatic, shadow-drenched figures that are Donley's signature, figures whose "combination of inscrutability and aristocratic beauty ... seduces the viewer," as Molly Beth Brenner wrote in a 2004 Chronicle review. But the show will also include a first for the artist: a piece of sculpture. "I had this idea – and it could only occur in Austin, I think," says Donley, "that I wanted to do something that would be a summation of much of my work, maybe the darker aspects. It is a skull mounted on a pedestal with a jester's cap. It is my ultimate ecce homo – behold the man. What better way to remind someone of the brevity of life than to thrust in their face a skull?"

The impulse to shock someone into thinking about mortality has been driving Donley throughout his career. "I am a differently ordered person," he says. "That is, I probably couldn't be characterized as overly optimistic. I always thought that optimism referred to an eye disease. It's a kind of darker view, but I'm wanting very passionately to say something about the human condition, and I think that's what great art does. It jolts us into taking a refined look at our situation and the kind of world we inherited, maybe to promote change, I don't know. But sometimes my job as an artist is to paint bleakly about bleakness, because that's all I see. 'Los Bien Perdidos' is what I call my cycle of images: the lost ones, the very lost ones, the profoundly lost ones. And these characters somehow touch on that. These individuals that I create – 99 percent of them through my imagination – are on a journey, some sojourn: getting lost, getting found, getting drunk, getting drunker, setting out. Perhaps suggesting that we're all lost in some emotional, spiritual, psychological, cosmological way. That's been the burden of my art since I announced to the world that I was an artist."

"Ray Donley: Still Awake in the City of Dreadful Night" is on view through March 20 at the Russell Collection Fine Art Gallery, 1137 W. Sixth. A reception for the artist will be held Friday, March 20, 6-8pm. The event is open to the public, but an RSVP is requested; please call 478-4440. For more information, visit www.russell-collection.com. 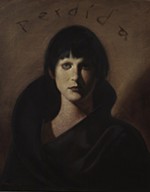