Steps on a path 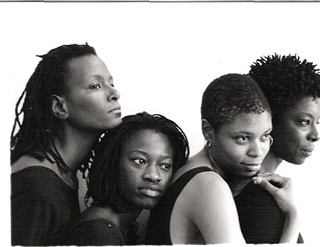 The family moves to Los Angeles.

Bridgforth starts working as a family-planning counselor at Planned Parenthood.

Bridgforth moves to Austin. For the next nine years, she works with the Austin/Travis County Health and Human Services Department as a disease intervention specialist, HIV-tester, educator, and outreach worker.

Bridgforth directs The Wrap It Up Show, a Planned Parenthood-sponsored call-in radio show on KAZI for teenagers to discuss safer sex and relationships.

Bridgforth gets sober in Austin.

Bridgforth receives a residency at the Playwrights' Center in Minneapolis.

Bridgforth's "that beat" is included in does your mama know?: An Anthology of Black Lesbian Coming Out Stories, published by RedBone Press.

no mo blues is produced in Minneapolis and North Carolina.

dyke/warrior-Prayers is produced at the Michigan Womyn's Music Festival and in Chicago, North Carolina, and Austin.

Bridgforth establishes the Finding Voice method of creative writing, leading writers to "examine the socio-political realities of their lives in a form that is part poetry, part oral history."

The Theatre Communications Group/National Endowment for the Arts grants Bridgforth a playwright-in-residence award at Frontera@Hyde Park Theatre, which produces her play con flama.

YWCA votes Bridgforth Woman of the Year in Arts & Communications.

Bridgforth helps organize Fire & Ink: A Writers Festival for GLBT People of African Descent at the University of Illinois in Chicago.

The Center for African & African American Studies at UT-Austin hires Bridgforth as "anchor artist" for the Austin Project, bringing women scholars, artists, and activists together for a 10-week artistic process.

Bridgforth is named artist-in-residence at ALLGO.

Bridgforth is diagnosed with cervical cancer and has a radical hysterectomy.

delta dandi is commissioned by Women & Their Work through a Creation Fund Award granted by the National Performance Network.

Bridgforth maps her move to Los Angeles, via a year of artistic collaborations in New York City.