In this new play, the infamous tale of a circus elephant that was hanged is recounted in heartbreaking fashion 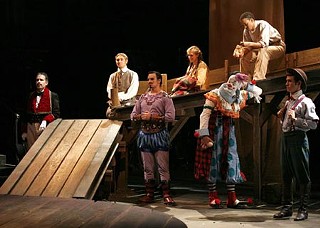 They hanged the elephant.

It was an act of cruelty that seems almost impossible to imagine, much less accomplish, yet history assures us that on Sept. 13, 1916, in the dusty little burg of Erwin, Tenn., that's just what happened. As punishment for killing one of its handlers, an elephant with a circus that was passing through the region was strung up like a human criminal and executed. And now Michener Center playwriting fellow George Brant has recounted the whole sordid story for us in a play that, as produced by the University of Texas Department of Theatre & Dance, cracks our hearts without ever showing us a drop of blood, a hanging chain, or a trunk.

Seven performers represent the townspeople of Erwin – a young girl, a steam-shovel operator, a preacher, the marshal, and others – and seven others represent the Sparks World Famous Shows, the third-rate circus that rolled into town with the 5-ton behemoth, Mary, said to be an even bigger pachyderm than P.T. Barnum's celebrated Jumbo. Brant lays out the stark contrast between the camps: the drab Tennesseans, bored with their dreary small-town existence, and the exotic circus folk, all colorful outfits, strange abilities, and worldly ways. Jan McCauley's costumes beautifully reinforce our sense of their polar opposition, with the townies dressed down in rough fabrics of ochre, beige, and gray, while the circus performers are decked out in candy-colored apparel with extravagant flourishes: ruffles, feathers, bows, and outsized collars and cuffs. They're day and night, earth and air, but we come to see that they have something in common: Both are insular communities, suspicious of others and quick to lash out if they should feel they're under attack. As Brant unspools the story, that seems a significant factor in escalating this tragic episode to its grotesque conclusion.

Brant takes a circus-daredevil-sized risk in laying out the entire story in interwoven monologues delivered by the various characters. It's a conceit that's almost anti-theatrical, since it never allows for any direct interaction among the characters, and sustaining it for an entire play without losing dramatic momentum is a helluva challenge. But Brant's writing is vivid enough to make it work, and like the juggling joey in whiteface here (an engagingly expressive Ben Schave), he keeps all the balls in the air. His approach transforms the story into an oral history with constantly shifting perspectives that show us anew how perceptions of an event can differ and speak to the nature of communal experience and community itself. We're witness to the witnesses, whose sense of the past has been colored by what they saw and where they stood – inside or outside the community; the observations of the Hungry Townsperson, drolly delivered by Matrex Kilgore, remind us that this event took place in the South and at a time when lynchings typically involved men with dark skin rather than circus animals.

As the play moves through the killing of the inexperienced redheaded handler and the crowd's lust for the elephant's blood, the spinning of the story becomes more of a choral work, requiring the actors to be concerned not only with their own individual speeches but with the rhythm and flow of everyone's speeches, with the collective shaping of an image. Occasionally, the relative inexperience among the student performers leads some members of the cast to work the text too hard, but overall they're sensitive to the larger needs of the play, and guest director Laura Kepley fashions them into a fine ensemble, maneuvering them smoothly around scene designer Szu Feng Chen's spare but impressive wooden platform and ramp and towering scaffold and building their telling of this story to a tense, affecting climax. The descriptions of Mary's hanging are so sharp and sharply spoken, you feel the devastation of the characters who were there. They hanged the elephant, and though none of it was shown, you'd swear you saw it all.