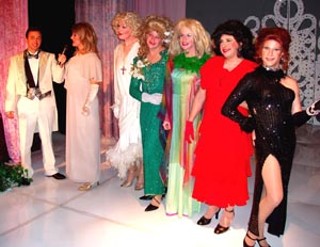 Depending on whether or not a guy is in touch with his femininity, a man in drag is either intimidating or fascinating, and you can be sure it's the latter that's intended in this Naughty Austin production at Arts on Real. Those bad, bad boys on Real Street first produced this parody of all things beauty-pageant-ish to great acclaim back in 2004, and they revive it here for its third straight holiday run. Like so many other live performance venues in town, Naughty Austin seems to have found its holiday tradition.

For the uninitiated, the show – conceived, written, and scored by Albert Evans, Frank Kelly, Robert Longbottom, and Bill Russell – revolves around a beauty pageant sponsored by Glamouresse, a fictitious cosmetics company. Six contestants from around the country vie for the honor of being Miss Glamouresse, participating in swimsuit, evening gown, talent, and beauty-crisis-counseling competitions. Each of the contestants also serves as a spokesmodel for the sometimes sexually suggestive products in the Glamouresse line. The gimmick, of course, is that the contestants are not women but men dressed as women, and at least some of the entertainment value lies in the fact that you really can tell the difference.

Blake Yelavich, Naughty Austin's producing artistic director, wears multiple hats for this production. In addition to directing the show, he's co-designed the set with Bobby Lee and the costumes with Ia Layadi, and the overall visual impact is nothing so much as a beauty queen's wet dream. Draped in lacy, lightly colorful fabric and dressed out with dozens upon dozens of flowers, the set bears an uncanny resemblance to a very comfortable pillow (scented, of course). Three of the performances deserve mention. Bryan Schneider as Miss West Coast skewers every interpretive dance ever performed while wearing what resembles a bastardized Twister mat. While he basically delivers a one-note performance, Errich Petersen almost steals the show as smarmy emcee Frankie Cavalier, because the single note he plays is more often than not hysterically funny. But it's Leslie Hethcox who most consistently commands the stage as Miss Texas, at one point wowing the crowd with a patriotic dance number that's as big as the Lone Star State.

The production contains so much sharp parody, it's a sobbing shame that the choreography more often than not appears haphazard and underrehearsed, and this despite the fact that the show had been running for a month when I saw it. Also bothersome were the hairy arms of J.R. Ryan's Miss Great Plains. Now let's be clear: I'm no slave to fashion, so I've got nothing against hirsute women, but Ryan is the most attractive woman in the show, so it's somewhat of a shock when he takes off his gloves and reveals his dark and gossamer down. Given the otherwise smoothly feminine visual presentation, a wax job would have been appropriate and, thus, would have eliminated the distraction the fuzz caused every time it appeared on the stage.