Eeyore's Birthday: A statue where the party started

The Eastwoods Neighborhood Association is raising funds for a sculpture of Eeyore to commemorate the park's part in the launch of that Austin rite of spring, Eeyore's Birthday Party 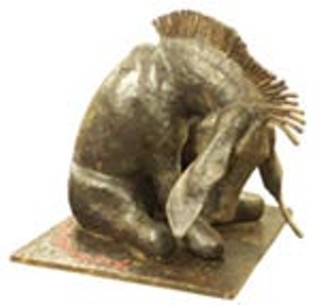 Eeyore's Birthday has been an Austin rite of spring for 40 years now, and almost everyone associates it with Pease Park, where it's been held for most of that time. But the celebration actually got its start in Eastwoods Park, that patch of green space just north of the UT campus, around San Jacinto. That's where students Lloyd Birdwell and Jean Craver and English professor James Ayres would tie a red balloon and set up a maypole and a keg on an unspecified Friday in May to signal the party was happening. Now, the Eastwoods Neighborhood Association wants to commemorate the park's part in the launch of the local tradition with a sculpture of Eeyore to go on the path near the children's playground. Sculptor Bob Coffee has created a model for the 26-inch-tall statue – kid-friendly size – and now all that remains is to raise $10,000 for its casting and placement. If you'd like to see A.A. Milne's doleful donkey have a home in Eastwoods, make a check out to: Austin Parks Foundation, specified for the Eastwoods Park Eeyore Sculpture, and mail it to Eastwoods Park Eeyore Sculpture, c/o Barbara Epstein, 817 E. 30th, Austin, TX 78705. For more information, e-mail bepstein@texas.net.