Four of Austin's funniest comics have created a new showcase in which the hook is the comics doing what the audience does, i.e., taking a belt, knocking one back, hitting the sauce 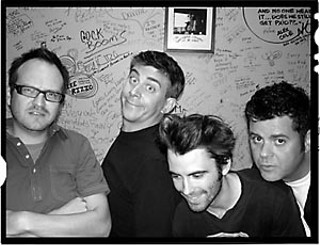 This just in: Comics drink!

Not much of a shocker, we know, but in the case of the new stand-up venture 100 Proof Comedy, their tippling is actually part of the show. When professional funnymen JR Brow, Matt Bearden, Doug Mellard, and Matt Sadler decided to join forces and create a new showcase for themselves, they figured why not have the hook be the comics doing the same thing the audience does, i.e., bending the old elbow, taking a belt, knocking one back, hitting the sauce. So that's just what they did. This Fab Four of local jokers uncorked their liquor-and-laugh-athon this past Monday to a full house in the Cap City Comedy Club lounge. Special guest Charlie Hodge of KLBJ's Dudley and Bob Show opened the show with a toast and a bit later interrupted the opening set of Fifth Beatle Chris Allen with two shots in hand, giving one to Allen so they could toast one another. That set up a tradition for the night: Allen then brought shots to the stage during Mellard's set, Mellard did the same during Sadler's set, Sadler did during Bearden's, and Bearden during Brow's. The result was not the slopfest you might imagine, as this crew features mostly two-fisted drinkers; rather, it gave the evening an unexpected and pleasing sense of ritual, "sort of like passing the torch in the Olympics," says Brow. He acknowledges that some patrons might have been anticipating the spectacle of stand-ups sloshed to the point of self-destruction – "I think the crowd was expecting us to get really, really hammered" – but that wasn't what they had in mind. "We were just looking for people to have a good time on a Monday night," he says. "And I think we succeeded."