Message in a Can 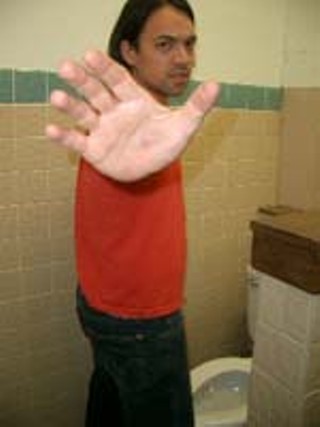 Public bathrooms. You never really know what you'll find in there, and I'm not just talking the bathroom part, I'm talking the public part. The fact that, unlike your cozy, safe, familiar bathroom at home, so many people have passed through. And some have left their marks – in more ways than one. You may be faced with one thing when you open that stall door, but when you turn around and close it, you're probably faced with something else entirely. If you haven't written it, you've read it, and it's entertained, amused, infuriated, and fascinated, as only something that's written while resting your rear in porcelain contemplation can.

That's certainly the case for one of the three artistic directors of a chick & a dude productions. "I've always had this obsession with bathroom graffiti," says Skola. "Graffiti of any nature, really, since I was 9 or 10, when I asked my mom about the graffiti that I saw on trains. She told me this story about how back in the Depression there wasn't always a sure means of communicating, so people would use the train system, to find people or to pass messages from family to family. I don't know if that's true, and I don't really want to know because the idea is so interesting, the idea of communicating something personal in such a public, arbitrary way. And then I would find myself in bathroom stalls and be faced with the same thing. Whether it was something political or kind of giddy or strange, about love or pain or some kind of emotion or religion, I got this feeling of passing a momentary urge from one person to another in that same public, arbitrary way, and what that says about us as people and as artists. Because there's no question it fits under the broad category 'art.' And once you write it, you're the artist."

About a year ago, Skola put on the table the idea of doing a show inspired entirely by Austin bathroom graffiti. "Originally, it was just an idea to write short theatre pieces," says Skola, "but it's turned into a celebration of Austin art and Austin artists." With contributions from seven visual artists, six actors, and 11 playwrights – including Lowell Bartholomee, Dan Dietz, and the Chronicle's own Wayne Allen Brenner – and scored with tunes by Austin musicians, the result of Skola's and her collaborators' efforts can now be seen onstage at the Blue Theater.

And who knows? You might even see something that you wrote up there.