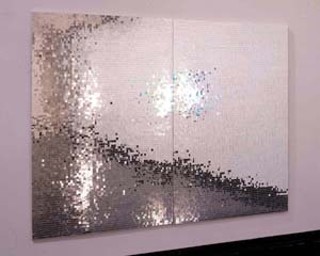 Austin Museum of Art, through May 23

Is it a particle? Is it a wave? Light has a way of behaving like more than one thing at once. Sometimes received and sometimes reflected, it can transform the appearance of an object or become the object that is transformed. Jim Hodges is fascinated with the ever-changing aspects of light. The artist uses light as his subject, his tool for creation, and as a lens through which to view his art. Hodges invites light into this show at the Austin Museum of Art as an invisible presence that follows the viewer from piece to piece; sometimes it takes over as the focus of a work, sometimes it serves as facilitator for a work's observance. And because light is so varied and unusual in its properties, paired with Hodges' unusual concepts and viewer-friendly philosophy, it helps to create a kaleidoscopic exhibition.

Hodges seems drawn to light's reflective qualities. In Folding (Into a Greater World), he has meticulously cobbled together tiny squares of mirror to create a huge, particulate surface that takes on the viewer's own image, shattered and reconstructed, as its point of focus. Not only does this piece play with reflection as creation, but the different-sized mirror bits (resembling, assembled, both an unrolled disco ball and a swath of fantastical alligator skin) create a light-on-water shimmer on the gallery floor and walls. The work simultaneously invites the viewer to see herself newly while surrounding her with a familiar effect from the natural world. Oh, Forever has a similar effect; a collagelike circular form made of smoothed aluminum-foil squares, it's as otherworldly as the moon and as everyday as freshly baked cookies.

The room-sized Oh Great Terrain explores reflection with less success. On one wall, mirror shards are arranged in an explosive pattern while on the opposite wall (painted in an overblown camouflage), another mirror rotates slowly. It's intended as a single piece, but the walls don't unify across the large space. Each wall ends up functioning as a separate, diluted work instead of as an arresting whole.

Hodges' electric light art is inspiring. Again fusing everyday with extraordinary, the artist attaches random-sized household lightbulbs to banks of sockets. Some panels simply glow; some blink and flicker. Bathing the viewer in variations of color and brightness, these works exude changing amounts of palpable warmth – an effect that makes the light seem alive. In Just This Side, Hodges has programmed rows of bulbs to approximate the sun's activity in a day; red and pink bulbs light up at dawn, mostly white ones burn at midday, and bluish light glows at night. The piece expresses the most ancient of observable phenomena through the modern object created to control that very phenomenon.

Again and again, through concept and craft, Hodges simultaneously challenges his viewer with layers of meaning and grounds her with familiar objects and reminders of the natural world, building a show as illuminating as it is incandescent.