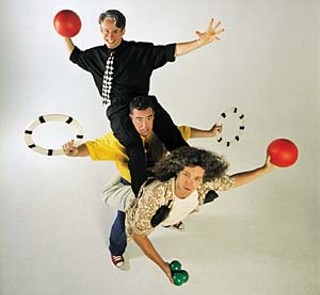 Now I want a leaf blower. If you knew me, you'd know this is totally out of character. Waste is not my thing, particularly wasting nuclear power on something I can do with a rake. But now I want a leaf blower, not to clean my lawn, gutter, and sidewalk, but so I can suspend a beach ball in midair and make it dance.

That may not sound like much, but in the context of this extravaganza -- for that's exactly what it is -- it's an amazing, absolutely dazzling feat, one of many that these idiots perform. They call themselves Pyro, Gyro, and Walter (Jon O'Connor, Rob Williams, and Kevin Hunt, respectively), and for the last 20 years they've been entertaining the masses. They originated their vaudeville-style show in Austin, and this is their farewell tour.

How best to do them justice?

The world is a place filled with innumerable problems. Telling you what they are isn't necessary because finding a respite from them is nearly impossible. Unless, that is, you go see the Flaming Idiots. For at least 90 minutes (I'm not sure how long, actually, because I lost track of time), you'll think of nothing outside of what's happening on Zachary Scott Theatre's Kleberg Stage. I can't recall being so thoroughly entertained by something for many years. It's tempting to say that's all these three do, simply entertain, but then I realized that, for the time I watched them, I didn't think of anything except what they were doing, didn't care about anything but the pure pleasure they were allowing me to experience. That's not simply entertainment. That's almost a miracle.

And what, exactly, is it that they do? Among other things, they juggle balls, rings, bowling pins, knives, flaming torches, and beanbag chairs. Sometimes they juggle wrapped around each other; sometimes they do it around audience members; once Gyro did it standing on the shoulders of an audience member (with those flaming torches, no less). Walter, posing as a swami, swallows a balloon (and no single feat they performed prompted more discussion between me and my guest than the swallowing of that very lo-o-o-ng balloon). Gyro makes a sandwich with his feet (a bologna sandwich with mayonnaise, mustard, lettuce, a fine slice of pickle, and two slices of American cheese, both of which he unwrapped). Gyro also throws cards in the air and cuts them in half with a whip and writes a person's name with both hands and both feet at the same time.

Some of that may not sound so amazing, some of it may sound totally amazing, but most amazing is their tremendous sense of humor and the rapport they have with their audience and with one another. I laughed so hard I choked, cried, and gave myself a headache. I loved these guys. I would be totally amazed to find that they don't love both one another and what they do together. If you've never seen them, go. Don't miss this. You'll most likely never get the chance again.

And while I won't ever get it, I really do want that leaf blower.