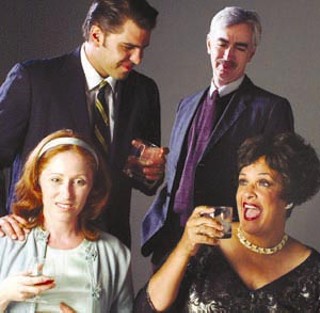 October is the time when unholy creatures roam the most freely. The weeks preceding All Hallows Eve give license to all nightmare beasts, from living dead to Devil's brood, to walk among us, and thus, this may be the ideal season for the Zachary Scott Theatre Center to have revived Who's Afraid of Virginia Woolf? Edward Albee's 1962 drama is a real horror show, with middle-aged marrieds George and Martha perpetrating a psychological massacre as vicious as any committed with a chain saw. He is the failed academic, still an associate professor after 20 years and fading into obscurity -- Martha claims that she hasn't been able to see him in years. She is the college president's daughter who married badly and has since become what her husband calls "a subhuman monster," a brazen, braying brute who bites until she draws blood. Their disappointments, suspicions, and fears have done to them what the full moon or a beaker of steaming liquid might do to the protagonist of a Universal fright film: transform them into monstrosities. It's the Invisible Man versus the Werewolf, and Zach's production, directed with precision and without mercy by Ann Ciccolella, makes their clash as titanic and terrifying as that matchup in a movie. Ciccolella is blessed to have actors here who are willing and able to go everywhere Albee demands. Franchelle Stewart Dorn embodies Martha in all her vanity, arrogance, naked lust, pettiness, and alcoholic rage. When she crosses the stage, hips swaying and arms swinging, Dorn conveys Martha's earthiness and the lilt from the liquor she swills almost nonstop through the play's three acts. It's an alluring walk with a hint of playfulness to it, but all the fun stops when she does. She'll cock her head, stab a finger through the air like a dagger, and part her lips, pulled wide in the malicious grin of a jack-o'-lantern, to let fly some napalm-laced slur at her target of the moment; where Dorn's Martha fires her flamethrower mouth, only scorched earth remains.

She's so frighteningly effective that we can comprehend George's desire to up the stakes a little, to make her pay dearly for the humiliation she's inflicted on him. Philip Goodwin, with his mild manner and slender build clad in a cardigan, calls to mind the late Mr. Rogers, and his measured speech and subdued reactions reinforce that impression, lending credence to Martha's claims that George is a weakling and a failure. But once provoked, Goodwin's George reveals his killer instincts, unleashing torrents of erudite invective, icily dissecting his victim's psyche.

Sadly, though, there are no true victims in Albee's world. Even Nick and Honey, the two innocent-looking young visitors who show up on George and Martha's doorstep at 2am, are not what they appear. Nick, the shining new hope of the biology department, his genes lined up perfectly in one blond, studly package, abandons his wife for a single liquor-besotted liaison with Martha, and his obedient if skittish bride turns out to use illness and denial to avoid intimacy and the parts of life that terrify her. When Drew Starlin lets his composed golden boy become a rumpled, smug satyr and Helen Merino crosses the line from timid spouse to shuddering hysteric, we can see that within every Jekyll lurks a dark and devilish Hyde.

All four actors and director Ciccolella have carefully seeded the performances with flashes of humanity. George and Martha's cruelty ofttimes has a darkly humorous edge, and Dorn and Goodwin both affect comic voices and melodramatic gestures to brutally brilliant effect. Merino animates Honey with a tipsy giddiness that is disarming. Then there are revelations that come when the combat briefly stops: Goodwin's stunned stillness when his defenses are pierced by Martha's emasculating insults; Dorn's eyes revealing the pain of a thousand thousand campaigns fought and wounds sustained. And Dorn's final howl of pain when Martha is confronted with George's climactic assault -- what Albee tellingly dubs "the exorcism" -- is wrenching in its vulnerability and anguish. Still, what drives this production and keeps it compelling over three hours is the ferocity and tenaciousness with which George and Martha wage their savage battle.

Michael Raiford's frayed-at-the-edges New Frontier living room, Susan Branch's Camelot-era fashions, and the program notes, all call our attention back to the age when the play was conceived, that time of Cuban missile showdowns, civil rights confrontations, and national anxieties about scientific progress that bubbled up in movies about radiation-bred monsters. But anyone who thinks that this makes the play a museum piece should take another look around. Our anxieties today -- over terrorist attacks, genetic manipulation, civil rights for gays and lesbians -- eerily parallel those of 40 years ago. We even had a big-budget movie this summer about a scientist who turns into a rampaging behemoth. Zach's production of Who's Afraid of Virginia Woolf? reminds us that now, as ever, the monster lives in us, and seeing it unleashed is a terrifying thing to behold.

Who's Afraid of Virginia Woolf?
This revival proves Albee's 1962 drama to be as brutal and unsettling as ever