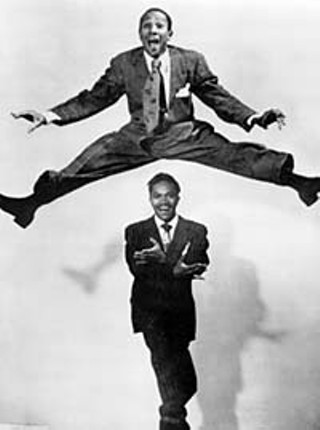 The Nicholas Brothers: Harold (above) and Fayard

Once seen, it cannot be forgotten: Two men descending a high white staircase by vaulting over each other, step by step, each daring leap landing in a split, followed by a miraculous spring back to a standing position, their legs like rubber bands snapping back into place. It is acrobatic, jubilant, and full of grace.

The two men are Fayard and Harold Nicholas, the brothers who danced their way to fame with a singular form of rhythm tap that blended masterful jazz steps with daredevil athletic moves and an elegance of motion worthy of ballet. The sons of two Philadelphia pit musicians, the Nicholas Brothers debuted in vaudeville while still boys but instantly began to astonish audiences, leading them quickly to the Cotton Club, where they performed with Cab Calloway and Duke Ellington; Broadway, where they appeared in the Ziegfeld Follies and worked with choreographer George Balanchine; the West End of London, where they worked with great jazz choreographer and coach Buddy Bradley; and Hollywood, where they appeared in 65 films, including Stormy Weather, the 1943 musical in which they perform that unforgettable staircase dance which has become their signature. We're fortunate that their remarkable contributions to dance were preserved on film for future generations to be amazed by and enjoy. Here in Austin, we're even more fortunate this week to have one of those brothers in town to share his knowledge, wisdom, and artistry with his many fans and his heirs on the tap stage.

Younger brother Harold is gone now, having died in 2000 at age 79, but Fayard continues to spread the good word of tap at the age of 88. He is in Austin this week serving as Festival Legend at the third Soul to Sole Tap Festival organized by Tapestry Dance Company. The festival brings together hoofers of all ages, tap teachers, and experts in the form -- from local hero Acia Gray and such familiar Tapestry faces as Nicholas Young, Brenna Kuhn, and Jason Janas to international stars Brenda Bufalino, Sarah Petronio, and Dianne Walker -- for five days of master classes, panel discussions, archival film screenings, a community tap jam, and a tap performance featuring the festival's guest artists. With Fayard Nicholas in residence, artists from tap's second and third generations have been able to learn at the feet of a master, to pick up firsthand the moves and skills and understanding of tap from its first generation. The fact that we have only one of the Nicholas Brothers left to share such knowledge underscores the importance of what Tapestry is doing with the Soul to Sole Fest. An irreplaceable part of an art form's history is slipping away, and it's vital for the continuation of the form that its past be passed along to the artists of today and tomorrow.

Obviously, the festival is geared toward tap performers, but those of us without much rhythm can still enjoy the fruits of having so many excellent dancers in our midst. Thursday night features an improvisational tap jam led by Nicholas Young, Friday offers a showcase of conservatory students and members of tap companies from across the country, and Saturday winds up with a blast of percussive footwork from the guest artists and faculty to the music of the Rich Harney Jazz Trio. All performances are at St. Stephen's Episcopal School, 2900 Bunny Run. You may not see any leapfrogging down a large white staircase, but without a doubt you'll see an abundance of dance that is acrobatic, jubilant, and full of grace.