Who says cartoons are just for kids? Clearly not many, as the Cartoon Network's Adult Swim -- with the likes of "Aqua Teen Hunger Force" and "Harvey Birdman" -- so palpably reveals every Sunday night. But a more difficult question to contemplate is the effect that cartoons and animation in particular have made on 21st-century U.S. culture. To tackle this issue head on, Blanton Museum of Art curator Annette Carlozzi has skillfully grouped a small, yet by no means undemanding, collection of contemporary art recently acquired by the museum through the generosity of Houston's international contemporary art collectors Jeanne and Mickey Klein.

Positioned in the back of the gallery, "Cartoon Noir" consists of three mixed-media works by Trenton Doyle Hancock, Arturo Herrera, and Jeremy Blake, as well as a recent drawing by Ellen Gallagher. On paper, these four artists seem to have little, if anything, in common. However, in Carlozzi's hands, their ostensible differences fade, and in their place emerges a shared interest in using cartoon's "noir" or darker underside to explore some of the moral complexities of contemporary life.

To come to terms with just how animation and cartoons work in this exhibition, it is best to start by sitting down in front of Blake's Winchester, a work that he made specifically for the 2002 Biennial of the Whitney Museum of American Art. Consisting of 18 minutes of continuously looping DVD projections, Winchester is the first in a series relating to Blake's interest in the Winchester Mystery House in San Jose, Calif. Constructed by Sarah Winchester over the course of 38 years, the house -- or sprawling 160-room Victorian mansion -- represents her efforts to come to terms with the premature deaths of her husband and child and the family curse that she believed the Winchester rifle legacy had placed on her family. To suggest what he calls "the more fearful chambers of Sarah Winchester's mind," Blake has superimposed ominous gunfighter apparitions on top of static 16mm shots of historic photographs of the house which in turn slowly transform before the viewer's eyes into abstract sequences recalling gunshot wounds, a besieged American flag, Rorschach tests, and High Modernist paintings, all the time accompanied by a litany of eerie noises and sardonic musical tunes. The effect of this combination is at once psychologically disturbing and visually intoxicating. While we want to transform Blake's morphing into some kind of coherent narrative, there is no story line or main character. Instead, we are caught in a never-ending loop of paranoia and morbidity. We grasp onto fragments of reality that dissolve into supernatural visions and abstract colors and patterns. Nothing is quite as it seems; there are no defined boundaries or safe spaces to inhabit. We are suspended in a world of spatial and temporal flux that only becomes more elusive the harder we try to impose order and continuity.

Like Winchester, Hancock's Painter and Loid Struggle for Soul Control reflects a spiritual journey. But, whereas the instability in Blake's work serves to question fundamental assumptions about U.S. national identity, in Hancock's it is tied explicitly to autobiography. Composed of a cacophony of surfaces, shapes, colors, and materials, the work belongs to a larger comic book-inspired, fictional world of "the Legend," who Hancock has depicted as the recently deceased, stripped, mound figure hovering in the lower right hand corner of the composition. Fighting for the Legend's recently departed soul are "Painter," represented by strokes of bright color, and "Loid," the black and white text that infiltrates the branches and trees. Through their struggle, Hancock represents more than just the triumph of good versus evil. Instead, he uses these abstracted superheroes to take us on an epic journey inside the workings of his myth-inspiring imagination and to share along the way his private personal battles and discoveries.

While the formal language of cartoons provides a stylistic vehicle for Hancock to explore his inner mind, Herrera approaches cartoons and animation in a more functional manner. In his skillful hands, cartoons become tools for looking or what one might even call a participatory observation. Like Blake, Herrera shares an interest in transformation and the workings of the mind. However, for Herrera, cartoons hold a more allegorical purpose. He inserts cartoons and landscapes that recall fairy tales into his seemingly abstract compositions as a means of calling attention to the process of perception. Relying on the associative power of these cartoon-like forms, they provide a means for making the aesthetic experience into one of active observation, not distanced contemplation.

Gallagher is also interested in using cartoons to physically engage the viewer, but unlike Herrera's cartoon imagery, which encourages free association, Gallagher's work implicates the viewer historically. Working within the authoritative structure of the modernist grid, from a distance Gallagher's work elicits a strong formal response. But as one moves closer, the autonomy of that aesthetic experience quickly dissipates. What looked like a minimalist composition is in actuality a series of tediously depicted cartoon-like lips, eyes, and locks of hair, inspired by stereotypical representation of African-American bodies used in the 19th and early 20th centuries. Through her repetition of these minstrel-inspired cartoons, Gallagher produces unease and insecurity in the viewer. How are we to respond to these cruel representations that upon first glance seemed beautiful, delicate, and striking? But this is exactly the type of questioning that Gallagher hopes to evoke. Through her veiling of these hideous cartoon features, Gallagher ever so cunningly forces us to rethink our assumptions as they relate to ideas about beauty and racial identity.

Although Blake, Hancock, Herrera, and Gallagher reference cartoons and animations differently and at times even tangentially, they all rely on the forms' associative and seductive power. Perhaps then the question is not what effect cartoons and animation have made, but the manner in which this imagery has infiltrated the very language with which we speak and make sense of the world.

"Cartoon Noir" is on display through Dec. 2 at the Jack S. Blanton Museum of Art, 23rd & San Jacinto, UT campus. Call 471-7324 for info or visit www.blantonmuseum.org. 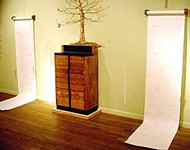