Bingo: Scenes of Money and Death 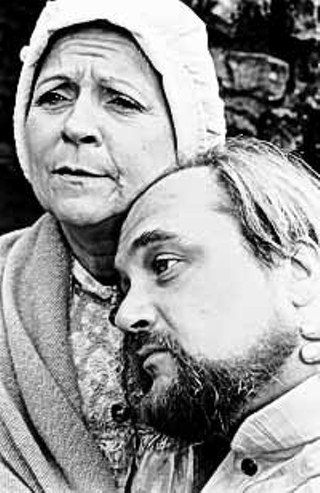 Imagine a world in which the poor wander from place to place, living on the streets, begging for food and money, being harassed and punished because they lack the means to support themselves. Imagine a world in which the wealthy band together to keep those less fortunate from discovering any avenue to improve their state. Sound familiar? Not only does it describe what's happening now, it describes the 17th-century world of Edward Bond's Bingo. So much for progress. The plot revolves around none other than William Shakespeare, who has retired to his estate in Stratford only to find himself plagued by a system he abhors but finds himself powerless, despite his wealth, to change.

As with other Bond plays, Bingo involves complicated challenges, particularly for smaller companies such as the Public Domain Theatre Company, including multiple settings and period costuming. Director David Jones and his designers face these challenges in workmanlike and sometimes original ways. Costume designer Dawn Allee provides simple yet appropriate post-Elizabethan period costumes, while the numerous scene changes are handled by adding and removing scenic elements, such as doors, gates, and furniture pieces, on designer Kristin T. Abhalter's earthen, threadbare set. Between the scenes, actors scatter sheets of colored paper to indicate the passage of time. By the end of the evening, the stage is inundated with sheets of white paper, which succeeds surprisingly well in indicating the snow-covered earth.

Many of the performances are impressive. Joe Walling does some of his strongest work to date with his childlike yet lusty Old Man. Robert Deike and Greg Gondek team up as a pair of fiery and righteous revolutionaries. Lana Dieterich's Old Woman is motherly, yet assertive when appropriate. Peyton Hayslip plays Shakespeare's daughter, Judith, as a haughty creation focused only on what her father can give, with little time for what he may need. Travis Dean's Ben Jonson is a comically drunken creation, verbose in the extreme. Most striking is Jessica Hedrick playing a slovenly, ignorant young woman whose end is graphically depicted in the course of play. Each time Hedrick enters a scene, she inhabits her character so fully that she seems to have stepped off the streets of 17th-century England and into the theatre.

Bond writes dialect into the dialogue for many of his characters, but it is clear that more work was done here than simple line memorization. Dialect consultant Ev Lunning Jr. deserves credit; however, there are exceptions. Michael Stuart's Shakespeare and David R. Jarrott's William Combe, the wealthy landowner who appears to control the politics in Stratford. Stuart and Jarrott stand out for their clear lack of dialect, and given the more than passable and often remarkable work from the remainder of the cast, these omissions are glaring. While Jarrott successfully captures Combe in terms of character -- likable despite an obvious attitude of superiority -- Stuart's Shakespeare is a wan and vague figure. Bond seems to have imbued his Shakespeare with a fire similar to some of the other characters, but here, a figure that should be the most interesting one on the stage is the least engaging of all. While this diminishes the impact of Bond's play, it does not eclipse it. Rarely have I encountered a playwright with a more clear social conscience, and rarely one who could express it with such visceral impact. Bingo is a lucid indictment of any society that puts monetary values over human values. While it was written 27 years ago, it seems most relevant right here, right now.