Roald Amundsen is a figure that practically begs to have a life-spanning epic biopic made about him. Being the first person to reach both the North and South poles by 1926 (among numerous other intrepid accomplishments), Amundsen’s achievements were ones made through inconceivable danger, unwavering commitment, and a considerable amount of recklessness. Of course, a lifetime of adventure must come at some sort of cost, and in Amundsen director Epsen Sandberg ventures to comprehensively document the explorer's catalog of triumphs, along with the fact that his determination made him a largely terrible person to those around him.

There are fortunately no compromises made with the image of Amundsen (Hagen, who previously played the equally adventurous Thor Heyerdahl in Kon-Tiki). By the time the credits roll you’ll be as stirred by his life’s work as you will be appalled by his egocentricity. The strongest aspects here are the attempts to reckon with the complete legacy of a complicated man, instead of surrendering to revisionism for the sake of a protagonist with clear-cut morals.

It helps, too, that his exploits are ones that have some inherently compelling cinematic qualities. Cinematographer Pål Ulvik Rokseth ensures that the immensity of the Arctic is felt, with extreme wide shots that exhibit the vastness of the polar desert. It’s an area of the world that’s so alien to us, conveying aspects of it creates a few sublimely novel images, like a massive ship stuck within the ice for months of starry nightfall.

Though for all its more intriguing qualities, the film still falls into the traditional biopic trappings. It can’t get away from the Wikipedia-entry style of storytelling, events mindlessly unfolding one after another like they’re being checked off a list. The clunky structure doesn’t help either, most of the runtime told through flashbacks as Roald’s brother Leon (Rubeck) relays his life story to Roald’s lover, Bess (Waterson). There’s a stiffness that makes it feel somehow at once too long and too short, feeling overstuffed with an entire lifetime of material while that second hour still manages to drag.

Still, Amundsen himself is uniquely fascinating, which gives Amundsen a bit of leeway purely by way of having a good subject. As in life, his story ends on a somber, subtle high note – offering a genuinely pensive moment of reflection on a life well-traveled, but also what that actually means when it’s born out of self-destructive obsession.

Available on VOD from April 2. 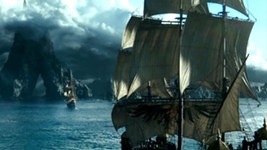 Kon-Tiki
Real-life adventurer Thor Heyerdahl's 1947 trip across the Pacific on a raft is re-created in this beautifully lensed film.