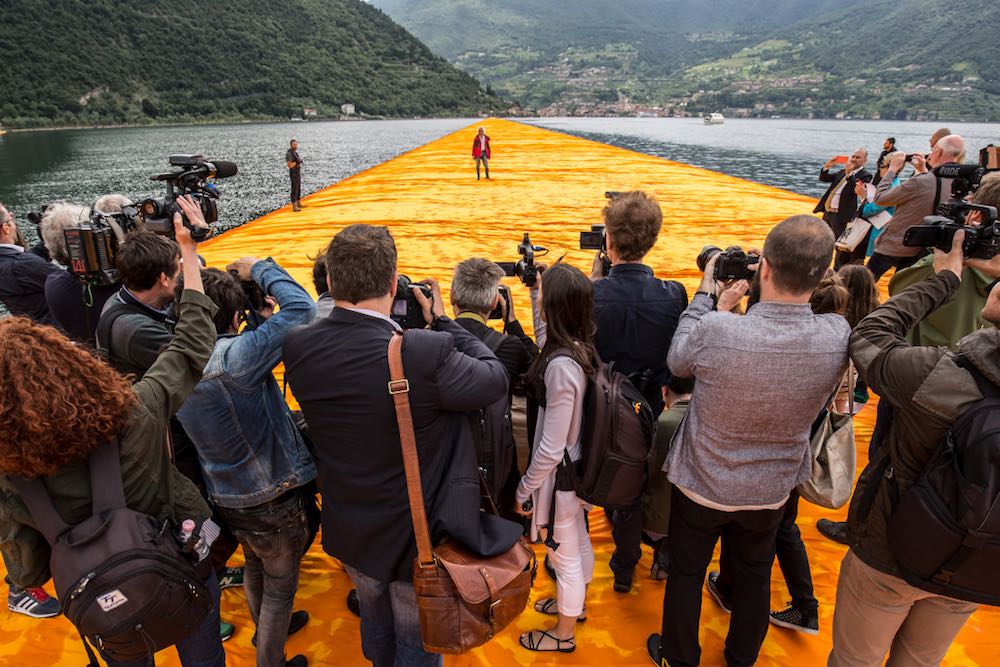 The artist as madman, the madman as artist. Over the course of almost 50 years, Christo Vladimirov Javacheff and his late wife Jeanne-Claude wrapped the facades of the Reichstag and Pont-Neuf, draped gated pathways in Central Park, and fenced the rolling terrain of Marin and Sonoma counties. Using the world as their canvas, the couple conceived and executed their costly and often controversial outdoor art installations on an impressive scale, uniquely transforming a structure or landscape for only a brief window of time before returning it to its natural state, leaving no trace of their artistic vision. Crazy, right? Together, they completed 23 such epic projects until Jeanne-Claude’s death in 2009, after which the widowed Christo mourned in seclusion until he decided to revive one of their long-dormant concepts, The Floating Piers.

The documentary Walking on Water chronicles, in bits and pieces, this rebooted project, which had germinated in Christo’s mind since the early Seventies. Like his earlier collaborative work, it is an audacious undertaking. Starting in the village of Brescia at the foot of the Italian Alps and crossing Lake Iseo to connect to two islands, this floating grand avenue traverses three kilometers of primarily water. Over a 16-day period during the summer of 2016, over a million pedestrians strolled along this undulating walkway made from interlocking plastic cubes sheathed in a shimmering saffron-colored fabric, much as tourists walk the High Line in New York City’s Chelsea district. The film’s title references the physical and mental sensation Christo wanted visitors to experience as they ambled along his buoyant promenade. It also slyly references the ego of a cranky, stubborn, temperamental, and uncompromising perfectionist who reigns over this enterprise like le grand artiste he is.

The movie is sketchy in the sense it doesn’t document a beginning-to-end narrative of the project’s life span. (The filmmakers reportedly shot 700 hours of footage.) Because Christo and Jeanne-Claude conceptualized and planned the installation decades ago, you’re plopped headfirst into his effort to consummate their artistic vision in a disorienting introductory sequence in which the octogenarian pitches the project at an international conference attended by ardent millennials, and then at a New York City elementary school where the blank-faced students can barely understand the presentation given in his thick Bulgarian accent. No matter where he is, the celebrity Christo thrives on attention, regardless of his audience. There’s not much insight into his creative processes here; you’ll need to take a look at Albert Maysles’ quintet of documentaries about Christo and Jeanne-Claude’s other big-think art installations to gain that perspective. The real drama begins around the time the assemblage of the floating piers commences, when Christo frequently butts heads with his tireless operations director (a heroic Vladimir Yavachev) and subsequently threatens the local Italian bureaucrats' intent of maximizing profits without regard to human safety once the piers are afloat. But even then, the movie remains patchy as it continues to jump somewhat arbitrarily from day to day without fully realizing its subject matter. The one dependable constant in all of this is Christo himself. Smiling ecstatically one minute, despondently hangdog the next, he exhibits a genius lunacy on par with his life’s work.