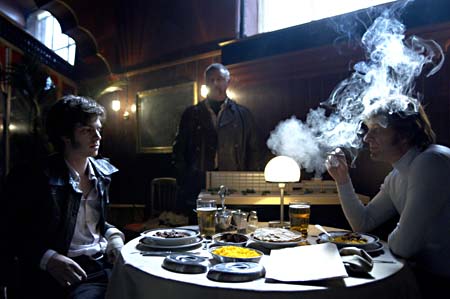 Red Riding: 1974 may announce its era upfront, but its roots go back way deeper. This is a noir, the kind where the good-for-nothing gumshoe (here, an investigative reporter) has a habit of getting his face bashed in, usually on account of a girl. RR: 1974 is the first of three adaptations (filmed concurrently) of David Peace’s linked novels about crime and corruption in Yorkshire, England. The three films – each written by Tony Grisoni but directed by different filmmakers, with cast members crossing over from RR: 1974 to the 1980 and 1983 installments – were aired on television in the UK successively; in New York and Los Angeles, the three installments played theatres in one long, arse-bruising bill. Alas, until next week, Austin only has Jarrold’s kick-starter to go on, which is a little like teasing an audience with two episodes of The Wire and then telling them to sit on their hands. I don’t mention that deeply addicting HBO show for nothing: It’s another precedent for Red Riding’s grim business (as are TV’s State of Play miniseries and Prime Suspect, as well as films like Zodiac and Chinatown). So, no, Jarrold and his crew aren’t reinventing the wheel here – but, oh, they give it a hell of a spin. Garfield – all cocksure in his leather car-coat – plays Eddie Dunford, a crime reporter who returns home to join the news desk at the Yorkshire Post. Eddie quickly links the case of a missing girl to similar, years-old cases around Yorkshire, but he’s stymied in his investigation by the police, his paper, a local kingpin, and his own inexperience and hubris. Clues dribble in, sometimes intelligibly, sometimes not. “Who knows what I’m supposed to know these days?” a mentally frazzled key witness wonders, and I admit I occasionally wondered the same: RR: 1974 may, in fact, be an efficiently plotted piece of work, but I couldn’t be certain, having lost whole chunks of dialogue on account of the mush-mouth Yorkshire accent. Language barrier aside, the film translates sensations beautifully – from moody to mournful to lachrymose (not a lot on the shiny-happy spectrum, I’m afraid). Nothing in Jarrold’s CV (Becoming Jane, Brideshead Revisited) hinted at his ability to harness and maintain tension for such long, itchy minutes. Working in concert with director of photography Rob Hardy, he’s produced some breath-catching imagery: shattered plate glass piled like wicked shards of iceberg, a squatters’ community torched to whirling ash, a trench-coated femme fatale scurrying out of one lover’s bed and off toward another’s. She’s played by Hall with tiny tremolos – and styled like Veronica Lake with feathered bangs – and she’s the closest thing this black-hearted noir has to a soft spot. When she’s in frame, the palette’s dirty ochres and umbers go golden and we are gently egged into thinking life may not be so nasty and brutish as all that. Does life get the last laugh? I guess we’ll have to wait and see. 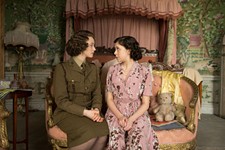 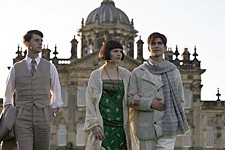