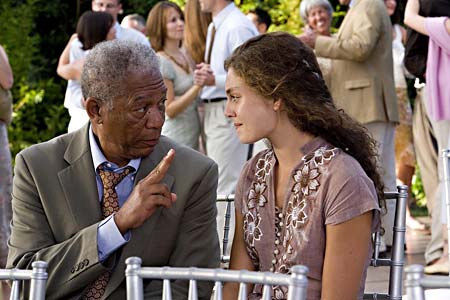 No one's cup runneth over, and it's unlikely that anyone will return for seconds. What Feast of Love lacks in nutritive value it makes up for with heaping wads of artificial sweeteners that coax each character's frown to turn upside down or find the silver lining in the sadness or latch on to any kind of handy cliché to keep the sorrow at bay. For love's perpetuity seems doomed to failure, as demonstrated by most of this movie's examples – except for the decades-long marriage of the story's central character and linking device, Harry Stevenson (Freeman), and his wife, Esther (Alexander). Yet even Harry, a professor on a leave of absence, carries a burden of sorrow and apparently drowns it in a daily cup of joe at the Jitters coffee shop run by Bradley Smith (Kinnear). Freeman here plays another variation on a role he's played with frequency, from Driving Miss Daisy to Evan Almighty: the kindly black interlocutor for troubled white folks. (Are these really the best offers this Oscar-winner gets?) Set in Portland, Ore., Feast of Love is an ensemble piece in which a cluster of characters lose love, find love, mourn love, celebrate love, and otherwise obsess – all under the watchful eye of Harry, who notices little things that the others do not. Thus it's handy to have Kinnear on hand to reiterate another role as an oblivious but well-meaning family man. Retaining some of the flavor of the community of voices he fashioned in 1994's Nobody's Fool, director Benton keeps the story moving forward through its tenuous social connections. The script by Allison Burnett, based on a book by Charles Baxter, is another thing entirely, positing so many ridiculous coincidences, illogical occurrences, and sandpapered truths that this "feast" quickly becomes a veritable trough. Still, there are warm, genuine moments that endear these attractive characters and their experiences to us despite all the folderol. Feast of Love may be enough for some to keep the pangs at bay ’til the real thing comes along. 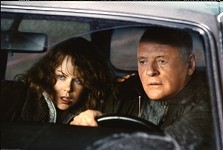 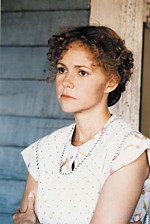