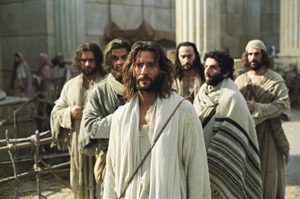 The Gospel of John

Put away your preconceptions about the Jesus Christ of the movies derived from those lavish Hollywood epics like The Greatest Story Ever Told and King of Kings or such modern reinterpretations as Jesus Christ Superstar or The Last Temptation of Christ. Also cast aside all the speculation about The Passion, the upcoming Christ movie by Mel Gibson, which, though largely unseen, has been the object of great debate regarding the possibility of it containing anti-Semitic sentiments. The Gospel of John – a three-hour, Canadian-produced, word-for-word retelling of the most popular Gospel – has slipped in under the radar for an American Bible Belt run following its September premiere at the Toronto International Film Festival. Produced by the Toronto faith-based media company Visual Bible International, The Gospel of John appears to be this company’s initial offering in its long-term plan to produce quality films that maintain Biblical integrity. The film’s speech comes from the American Bible Society’s Good News Bible, which was first published in 1966 and is written in easily understood language. Indeed, the film’s production values are top-notch and the performances quietly authoritative. It helps that the actors are mostly film unknowns, having gained their experience from classical theatrical training. Henry Ian Cusick’s Jesus seems a believable human being, even when performing miracles. No ethereal backlighting or halo effects, no gussied-up appearance, this Jesus and his apostles are men of the earth, dirtied with its dust and heat. Moreover, the filmmakers portray this Jesus as a man whose answers are not always immediate, as a man having to think an issue through before delivering his wisdom or deciding to perform a miracle, because sometimes it seems the only way to get people to believe that he is the son of God. One of the most fascinating aspects of the film is its depiction of Jesus as a devout Jew, whose outspokenness about the debasement of the Temple irritated the Jewish elders or Pharisees. His convictions about sin and forgiveness went against the edicts of the elders and brought him into confrontation with them. The Gospel of John covers itself with an opening preamble that states that crucifixion was a Roman, not Jewish, practice, since the film’s climax shows the Pharisees beseeching the Roman ruler Pontius Pilate to deal with this usurper of their authority. Having been written a couple of generations after the death of Jesus when the new Christian religion was coalescing around his memory, the Gospel of John goes further than the other Gospels in trying to prove that Jesus is the Messiah. Perhaps that’s why we see here more of the miracles and dissent against the establishment, rather than events such as the Last Supper, crucifixion, or the reflection in the desert. At three hours, the film occasionally feels like an endless church pageant, and the narration by Christopher Plummer is often a redundancy of what we are seeing on the screen. The greatest story ever told? I don’t know about that, but it remains a real humdinger. 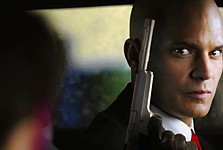 Hitman
Like the video game that inspired this film, Hitman is a brain-dead pleasure bomb.