Based on Josephine Hart's best-selling novel, Damage recounts a man's attempt to fathom the unfathomable, with tragic results. Dr. Stephen Fleming, a high-ranking member of the British Parliament, seems destined for great things, but something's amiss. The dispassionate, controlled distance he puts between himself and everything else has set him adrift in an unspeakable loneliness. Enter the enigmatic Anna, his son's twentyish girlfriend whom he meets at an embassy cocktail party -- their eyes lock for an uncomfortable period of time, few words are spoken between them -- and, in an instant seeming like an eternity, the bloodless existence Stephen has always known immediately gives way to inexplicable compulsion, a sexual fixation for which he risks the loss of his family, his career, and -- perhaps most important -- the order he has imposed on the world. The Spartan style of screenwriter David Hare (Plenty) is particularly well-suited to translating Damage to the screen -- he succinctly establishes Stephen's repressed character in the film's initial scenes -- but his overall success in this endeavor is mixed. Although intentionally mysterious, the character of the “damaged” Anna is often so cryptic that you want to attribute ulterior motives to her aggressive participation in the illicit affair -- like Stephen, you want to make sense of the insensible. The revelation that her teenaged brother's obsession with his sibling prompted his suicide years ago only muddies the waters of her character, suggesting an uncontrollable power over men that you objectively can't see. It does, however fit into the psychosexual context of Stephen and Anna's couplings -- clumsy and rough, neither erotic nor sensual, their copulations are staged and awkward, violent ballets of inarticulate primality. (They do it publicly in the doorway of a building off a Paris street; in the room next to the one in which Stephen's wife sleeps; on everything and the kitchen sink in Anna's apartment, Fatal Attraction style.) In this respect, Damage brings to mind Last Tango in Paris, although Malle's elegant, precise direction is drastically different from Bertolucci's work, a film that celebrates the loss of inhibition and control. Although relentlessly somber, Damage offers a perverse humor in the idea of father-and-son rivalry over the same woman: it's like the Oedipus complex in reverse. This is especially true when social situations bring everyone together in the same room, and you become an accomplice to the horrible truth. (The scene in which Stephen's son and Anna announce their engagement is embarrassing and shocking in its implications, yet funny.) As the complacent wife who instinctively distrusts her beloved son's fiancee, Richardson takes the top acting honors in the film; she seems most like a real person, rather than a cipher. In one scene towards the film's end, she lets loose with a scream and sob that comes from the very core of her soul, an exhortation of anguish and pain that -- unlike most of Damage -- is both unfathomable and understood. 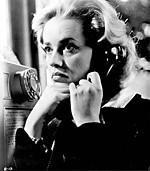 Elevator to the Gallows
...