The Nutcracker and the Four Realms

Pyotr Ilyich Tchaikovsky’s The Nutcracker is one of the most beloved and family-friendly ways to spend the holidays. The ballet accounts for almost half of major dance companies’ annual revenue. Let that sink in for a moment. In an extremely critical series of pieces for The Washington Post on the venerable ballet in 2009, Pulitzer Prize-winning dance critic Sarah Kaufman wrote, “The tyranny of The Nutcracker is emblematic of how dull and risk-averse American ballet has become.“ She goes on: “[Ballet] has forgotten how eye-opening and ultimately nourishing creative destruction can be.”

And while “creative destruction” has become my new mantra, this latest Disney film The Nutcracker and the Four Realms, a clunky title that has nefariously subtle threats of sequels waiting in the wings, has become my new sleep aid. Reimagined in a blender of the usual YA tropes for which we have no one but J.K. Rowling to blame, the film is as bland as Melba toast served on a bed of parsley while snatching sips of water from a nearby puddle following a rainstorm (that actually, in retrospect, could have some flavor). It is the very antithesis of creative destruction.

But you can only expect so much from the Disney machine, and this narrative culls from the ballet and the original story by E.T.A. Hoffmann in that young Clara (Foy) is searching for a key to open what amounts to a Fabergé egg handed down to her from her late mother by the eye-patched Drosselmeyer (Freeman, seemingly working on a sort of charismatic absent-minded professor cue). Clara is whisked off to fantastical lands, the eponymous realms of the title. There are mice who could be malevolent, there is an amiable nutcracker soldier named Phillip (Fowora-Knight) who assists her on her quest, and wait, is that Helen fucking Mirren? Indeed it is. Keira Knightley as Sugar Plum is one thing, but it is Mirren’s presence as the so-called villain, Mother Ginger, that telegraphs the fact that this film is bound to be a future “classic” that the family can casually agree to nod off to after the holiday meal is consumed, as everyone is halfheartedly searching for something to watch that is nonthreatening to most of the extended family. This Nutcracker is a dull and anemic film that has set and costume design for days (but only if you are a Thomas Kinkade enthusiast) and absolutely no heart whatsoever. My movie companion nodded off for a bit there in the middle, and later asked if she had missed anything. Alas, she had not. Is it possible for a film to be entirely composed of filler? Pick up those tickets to your local ballet show instead, and dodge this bullet of mediocrity while funding the (actual) arts. 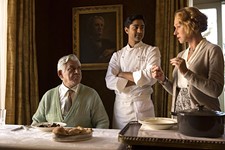