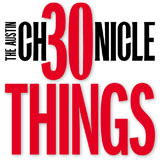 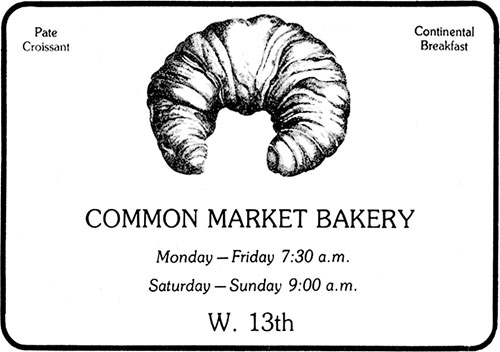 Issues From our First Year 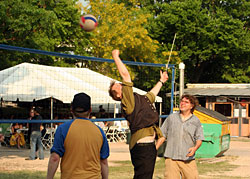 The author in flight

Every microculture has its own unique lingo and in-jokes, and The Austin Chronicle’s after-work games of (extremely) amateur volleyball – played with a regulation net and ball on a sand court in the headquarters’ back yard – are a goofy case in point.

1) Antics: Gratuitous goofing around with the ball prior to serving it.

2) Hobo Serve: A serve that veers wildly out of bounds, so named due to a legendary example that hit a homeless man who’d stopped to watch the game. Hit him right in the face – WHAM! – after which he blinked once, calmly returned his dislodged cigarette to his mouth, and wandered off.

3) Tape Dance: When the tape that marks the court’s boundaries is moved by a missed ball’s impact. An occasional point of contention: “Dude, that shit was IN. I saw the tape dance!” “No, dude, that was OUT. The ball hit the grass and the GRASS made the fucking tape dance!”

4) Street Serve: Players on the south side of the court can serve from the street beyond the perimeter fence; make the point, gain three points; lose the point, lose three points.

6) The Foot Rule: Players can use their feet to hit the ball, but only if they clap their hands and say “Foot!” Immediately before impact

7) Tender Middle: The area between two or more players where, when the ball is sent there, none of the players attempt to hit it – because each thinks another will go for it.

8) Deep Burn: To hit the ball (especially when back-court players have moved, stupidly, too close to the front) so it goes over the opposing team’s heads and lands in bounds but very near the back line.

9) Eevee Crossing: Waiting for the publisher’s ancient dog to make her way across the court to wherever she wants to go.

23) The Back Wall: The side of the Public Storage building that’s northeast of the court; it’s considered extra-awesome if, after the southside team scores a point, the scoring ball rolls until it hits this (relatively) distant wall.

24) “It’s live! It’s live!”: The cry resultant from a ball getting stuck in the branches of one of the surrounding trees, meant to remind players that, once the ball falls through or is forcibly dislodged, the ball is still in play.

25) All-Important Game ___: The final odd-numbered game that will break a tie in any series.

26) NO-tate: To not rotate the line-up of players. Used to remind a confused player who asks “Rotate?”

27) Numbers: To have enough participants to play a decent game. “Enough” depends on the players’ desperation: two against one will, if necessary, suffice.

28) WVL aka Weevil: The Winter Volleyball League, started by Chronicle publisher (and prime volleyball mover) Nick Barbaro as a way to ensure numbers for games during the shorter days of winter.

29) Tittle: To return the ball gently, so that it just barely clears the net and falls pretty much straight down on the other side, thus thwarting opponents who were prepared for a more vigorous return. This is a particularly insidious move.

30) Beer Foul: When a ball goes out of bounds and knocks over one of the many waiting, half-filled beer bottles or cans stashed in the grass around the court.