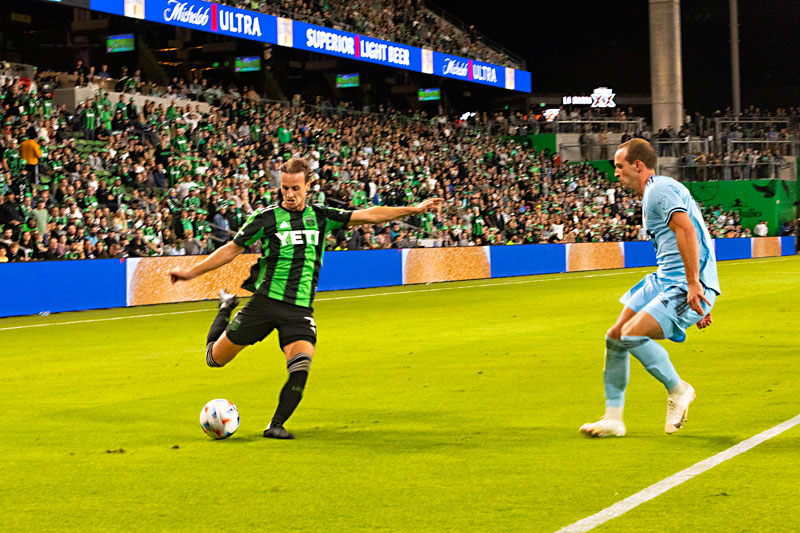 Last February, Austin FC completed the splash signing of sought-after Argentine midfielder Tomás Pochettino, making him the club's second-ever Designated Player and a key member of its inaugural roster. Eleven months later, Pochettino appears to be leaving the club. At least for now.

Argentina-based journalist César Luis Merlo (who, incidentally, was the first to break news of Pochettino's agreement with Austin FC last year) reported last week that the 25-year-old midfielder is headed back to his home country to play for four-time South American champions River Plate in Buenos Aires. The deal is reportedly a one-year loan with the option to become a permanent transfer, at which point River Plate would have to pay Austin FC a transfer fee. Pochettino was seen at a Buenos Aires medical practice on Tuesday, presumably to complete a physical exam which, barring a failed exam, could precede the move becoming official.

At press time, Austin FC had yet to confirm the reports, though the club has already begun making arrangements consistent with Pochettino's departure. On Monday, the club announced that 30-year-old midfielder and captain Alex Ring had agreed to a contract extension guaranteed through 2023 (with options years through 2025) that makes him a Designated Player.

MLS clubs are permitted a maximum of three DPs – players whose high salaries do not count against their club's salary cap. Austin FC already had three such players in 2021: Cecilio Domínguez, Sebastián Driussi, and Pochettino. Domínguez and Driussi aren't going anywhere, so Ring's redesignation means Pochettino would have been the odd man out.

So what do these moves mean for the local squad? For starters, it's an admission that whatever plan Austin FC had for Pochettino simply did not work out. The Argentine was arguably ATXFC's most inconsistent player in 2021, at times flashing tremendous creativity in attack but more often failing to impact the game in ways required by a player in such an elevated role. He finished the season with just two goals and two assists in 31 matches.

Blame for Pochettino's struggles should not be placed squarely at his own feet. Austin FC clearly had a different vision for the former Talleres player than the one that made him successful at his previous club. There, Pochettino played primarily as a holding midfielder, initiating attacks with long, accurate passes and lurking near the top of the 18-yard box for long-range shooting opportunities. In Austin, head coach Josh Wolff seemed determined to play Pochettino farther forward in attack, asking him to make runs into the box and finish attacks rather than start them. It never clicked. In at least one post-match press conference, Wolff scolded Pochettino for abandoning his assignment within the tightly scripted game plan.

But there's a reason they say, "If you're going to fail, fail fast." River Plate's unwavering interest in Pochettino (they were reportedly among the clubs Austin FC beat out for his signature in 2021) has given ATXFC the ability to cut bait (for now) on the Pochettino experiment. That's better than trying to force it for another year.

So, what to make of the Ring situation? Consider it essentially an accounting move. Ring was already making over $1 million (that's DP money) in 2021. But instead of the DP tag, Austin was using targeted allocation money – think of TAM like some extra holiday spending cash – to pay Ring's wages. Now, the club has freed up all that TAM to use on signings it may choose to make this winter to fill other needs, especially on the defensive end.

When your squad finishes with just nine wins out of 34, you generally have more than a couple roster holes to address.