The Verde Report: Lessons From an Austin FC Collapse 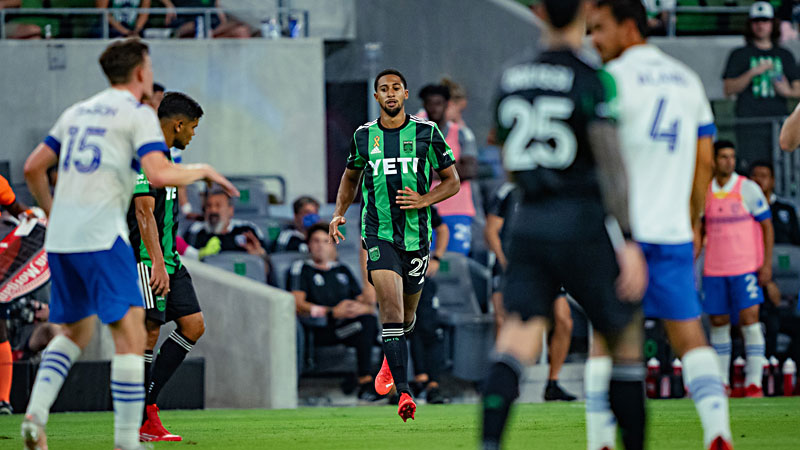 Austin FC lost a match it should have won Saturday, squandering a 3-1 halftime lead at home against the San Jose Earthquakes and letting it devolve into a 4-3 defeat, the club's fifth in a row.

In doing so, throughout an entertaining, fascinating, and – for Verde fans – deeply frustrating second half, the expansion club unfurled the laundry list of shortcomings that have plagued its inaugural season and that must be addressed if Austin FC hopes to produce consistent winning soccer in the near-ish future.

ATX attitude adjustment. Too often this season, Austin FC has been unable to course-correct at the first sign of frustration, letting bad moments turn into bad halves. Things got downright ugly Saturday night following a harsh hand ball call against Alex Ring, which resulted in a penalty – and the equalizing goal – for San Jose.

Eduardo "Chofis" López converted the spot kick despite Brad Stuver getting a soft hand to it. Players from both teams then chased after the ball in the net and ATX defender Julio Cascante took a tumble. Stuver reacted by ramming his shoulder into the back of Cristian Espinoza, a complete lose-your-cool moment that should have gotten him sent off (referee Baldomero Toledo had a questionable evening on both sides of the pitch).

Now, I can relate to why Stuver did this. When I was 10 years old in my first year of tackle football, I once jumped off the sidelines to tackle the opposing team's running back after that player injured me earlier in the game. Sometimes adrenaline just takes over and you do something silly in the heat of the moment ... when you're 10. Stuver is 30 and one of Austin FC's veteran leaders.

It's true that lack of on-field aggression has been a recurring issue for El Tree – and was again at the start of the second half in this match – but outbursts like that are the wrong solution. Case in point, López scored the winner two minutes later. Another ATX leader, the captain Ring, made a less egregious but more costly mistake later in the match, drawing a red card (second yellow) on a frustration tackle after losing the ball.

The lack of consistent intensity, coupled with these negative reactions, is a serious issue for head coach Josh Wolff, especially when his most trusted veterans are part of the problem.

Besler is sorely missed. Speaking of trusted veterans, the absence of 34-year-old center back Matt Besler has been felt in a big way since the cool-headed defender suffered a concussion in a match at the beginning of September. In the three-and-a-half games since, Austin FC has conceded 10 goals, or one quarter of its total for the season.

Besler's intelligent play earlier in the season allowed both Julio Cascante and Jhohan Romaña to have success alongside him. The pairing of Cascante and Romaña together, though, has flat-out not worked. Capable center back depth remains a glaring hole in the Austin FC roster.

Djitté getting up to speed. Thirty minutes into his first start for the Verde – an impactful start at that – young striker Moussa Djitté started cramping up and could not continue into the second half. The ATX attack has improved drastically since Djitté and Sebastián Driussi were acquired at midseason, but the club needs to get Djitté fully fit to handle the Texas heat.