Austin FC captain Alex Ring has scored twice in his last two matches, but his services might be better spent in defense. (Courtesy of Austin FC)

Stick this in the "That didn't age well" folder: Late in the evening of May 1, after Austin FC beat Minnesota United 1-0 on the road to improve to two wins and one loss on the young season, I asked Josh Wolff plainly, "Is Austin FC actually good?"

To the first-year head coach's credit, he knew better than to answer directly. He instead discussed his team's style of play which, up to that point, had worked pretty darn well and produced back-to-back victories.

It's now September, and Austin FC has not won consecutive matches since. In fact, the club hasn't even managed a draw after any of its three wins that have come since I posed that now-ridiculous question to Wolff. With a chance to fix that on Sunday night – the Oaks were straight off a cathartic 3-1 win against the Portland Timbers the weekend prior – Austin FC suffered its biggest defensive meltdown to date and lost 5-3 to rivals FC Dallas.

No, I did not ask the coach afterward, "Is Austin FC actually bad?" Unfortunately, there are enough objective stats to answer that question, from current ranking in the Western Conference (12th out of 13) to amount of goals scored (20, the fewest in the West). However, I did ask Wolff why ATXFC has been unable to build upon any of its scattered successes in year one.

"Gaining momentum is critical and putting together performances consistently back-to-back has eluded us," Wolff said. "Coming into [the match] we certainly thought we were in a good place physically and mentally given what the performance was last time, but it fell off a bit."

In one respect, there was a continuation of progress made. The Verde scored three goals for the second consecutive match, the most they've scored in any two-game span. The second and third goals – scored by Diego Fagundez and Alex Ring – showed character, as they came in the second half with ATX already down multiple goals. They were consolation goals in the end, but they rewarded a devoted Verde crowd which refused to stay quiet even with the home team down 5-1 at one point.

But the story of the match was Austin FC's inability to stop FC Dallas' young American attacking duo of Ricardo Pepi and Jesús Ferreira, or even make it look like they were seriously trying to. Part of the problem is directly related to the newfound spark in attack. In the past two matches, Wolff has deployed team captain Alex Ring, the club's best midfielder, much higher in the attack. Ring has delivered with two goals in two games, but the steady Finn's absence in defense was exploited time after time by Dallas.

Wolff faces a big decision going forward on whether to keep Ring farther up the field or drop him back to the defensive midfield role that it appears only he can adequately fill on the roster. Decisions like these are the kind Wolff must get right if Austin FC is to climb off the bottom of the standings in its expansion season. Despite what the volume inside Q2 Stadium might suggest, many fans are starting to lose their patience with the club's lack of consistency and want their unconditional support rewarded with more than the odd win every few weeks.

Another complication? It's officially college football season. Austin FC will no longer be the biggest game in town starting Saturday, when both Austin FC (away at Vancouver Whitecaps, 6pm on the CW Austin) and Longhorn football (home against Louisiana, 3:30pm) take the field on the same day. In case any extra pressure was needed. 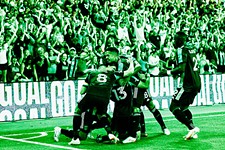 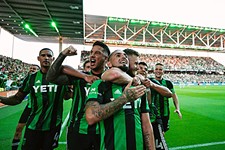