The Verde Report: The Honeymoon Is Ending. It’s Time for Austin FC to Earn Its Support. 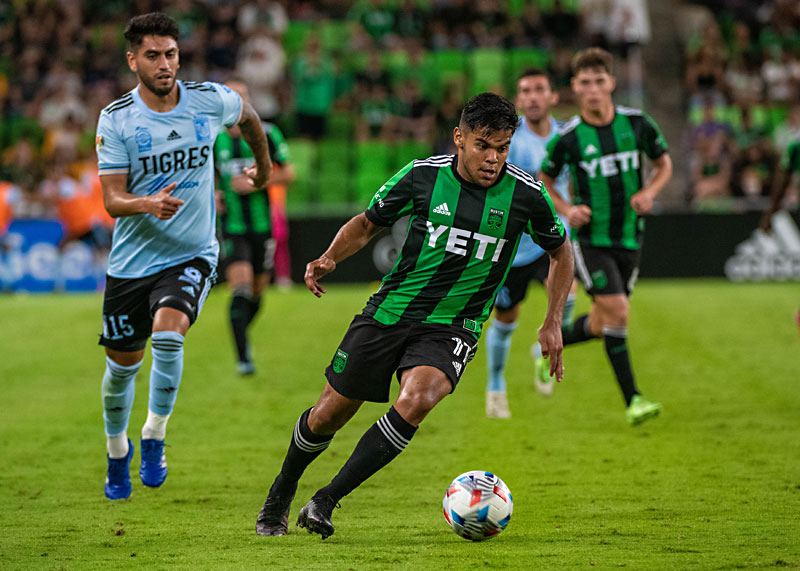 This week, the Major League Soccer season entered a two-week hiatus, ceding the stage (and several stadiums) to the CONCACAF Gold Cup, a championship for North and Central American and Caribbean national soccer teams. Austin's Q2 Stadium is slated to host a semifinal matchup on July 29, which has a decent likelihood of featuring the United States men's national team.

The break gives us a chance to reflect on and recover from a wild month of soccer in ATX that saw Austin FC play five MLS matches, including its first four at home. The Verde won one of those matchups, drew two, and lost two.

Most recently, the Verde hosted seven-time Mexican champions Tigres UANL in an exhibition match Tuesday, falling by a score of 3-1. (See recap online at austinchronicle.com/austin-fc.)

So far, the atmosphere at Q2 has been electric regardless of the outcome on the pitch. The club's supporters have flat-out brought it for all 90 minutes each time out, and players and coaches both home and visiting have been blown away. But those fans cannot and should not be expected to remain this engaged if the team shows it can't hang at the MLS level. The honeymoon phase is coming to an end, and it's time for the Oaks to start sprouting some W-shaped roots in this city.

Luckily for Austin FC, the MLS Cup playoffs – long since established as the measure of success for the a club in year one – are still very much within reach just 13 games through a 34-game season. ATX currently finds itself 10th out of 13 in the Western Conference but sits just one win out of the playoff hunt. The table is set for Austin FC to make some serious noise late in the year, but certain factors have to go their way.

Get (and Keep) Everyone Healthy

All season long it's seemed like as soon as Austin FC builds a bit of momentum, a key player goes down with a twisted this or a sprained that, causing big problems for head coach Josh Wolff and company. A staggering five out of 11 starters from the club's first match in April are currently out of action. Two of those, Ben Sweat and Danny Hoesen, are likely out the rest of the season, or close to it. Fortunately, Alex Ring, Nick Lima, and Daniel Pereira are all nearing their return. The club, already operating off a limited expansion roster, simply cannot hope to be competitive with so many key absences.

Get It Right in the Transfer Window

For months, Austin FC's brain trust has pointed to the current midseason transfer window (through August 5) as a critical moment for the club. The plan was simple: Save some resources for midseason when roster holes become clear, then fill them with the right pieces.

Well, the holes are clear, and they're in front of goal. Nine out of 13 games held scoreless. The club has already made one move to address this, signing 21-year-old striker Moussa Djitté from France, who will join the club once a visa is secured, but more help is needed. The club is in the market for a high-priced attacking midfielder. Those moves simply have to hit if the club is to have a successful back half of the season.

All that said, Austin FC can't just rely on outside help. Certain players already in Verde have to find their form to give the club a lift. Tomás Pochettino and Rodney Redes come to mind. Perhaps Redes' stunner of a goal against Tigres gives him some confidence he can carry into the next phase of the season.

Austin FC next plays the Seattle Sounders Thursday, July 22, at Q2 Stadium. The match kicks off at 8:30pm on ESPN.