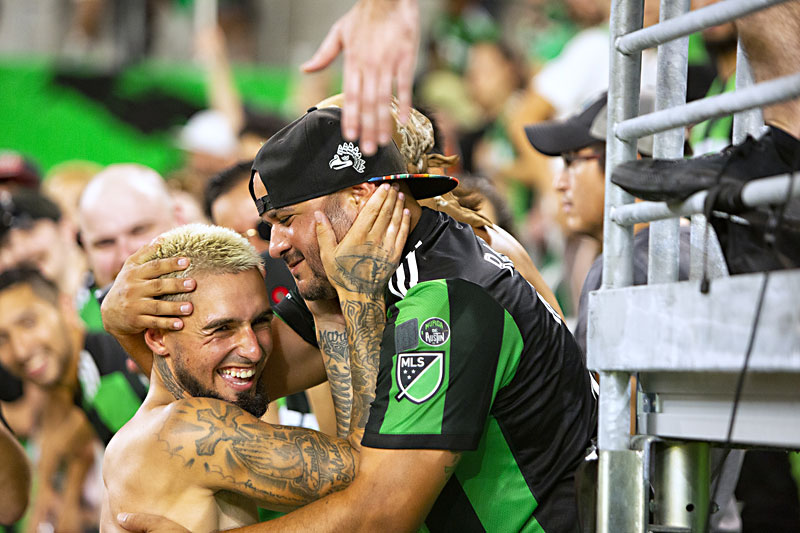 Austin finally experienced soccer as it's meant to look, sound, and feel last Thursday when Austin FC fired home a quartet of goals – the first four ever scored at Q2 Stadium following a pair of goalless draws – against the Portland Timbers to register the club's first home win. By the time this column reaches press, the Verde will have either backed up that performance with another Q2 victory against LAFC Wednesday night, or will have slid back down to Earth slightly with a loss on match day 13 (recap and analysis of the match can be found at austinchronicle.com/austin-fc). Just for fun, let's make a prediction: a 2-1 win for El Tree with goals by Jared Stroud and Tomás Pochettino. OK, how'd I do?

Regardless of how the Verde may have fared against the Angelenos, it will do little to alter the significance of the signature win against Portland. That significance was felt by players on the pitch and in the locker room, by the fans in the stadium and on their couches, and by the entire city in the ensuing days of high-fives and watercooler talk. It was, after all, the most consequential professional sports win in the city's history.

For exactly that reason, the significance of the occasion was also felt 1,500 miles northeast of Q2 Stadium at Major League Soccer's New York headquarters. Austin has shown, in its short MLS lifespan, a unique willingness and ability to carry the league closer to its holy grail: national mainstream relevance. MLS only had to come to the city of "alt" to find it.

Of the league's 27 franchises stationed in 25 North American cities, only Austin FC does not share a media market with a more mainstream league (NFL, NBA, MLB, NHL). Even in cities like Seattle and Kansas City with traditionally superb MLS support, the Sounders and Sporting KC are dwarfed locally, in terms of interest, by the Seahawks and Chiefs/Royals, respectively. Compare social media follower counts if you need evidence that, in those markets, MLS is still a league on the outside of mainstream looking in.

Here, things are different. On July 2, the day after the Portland game, "soccer" was included in Austin-area Google searches nearly four times as often as "football" (NFL/NCAA in offseason) and five times as often as "basketball" (NBA in playoffs), according to Google Trends.

Nick Sakiewicz spent over 20 years as an executive in MLS guiding three franchises – New York, Tampa (which has since folded), and Philadelphia – through their inaugural years. Speaking to the Chronicle by phone Tuesday, he said he's been "really impressed" by the speed with which Austin FC has ascended to relevance both locally and nationally.

"They have a real opportunity to kind of be first in the ground as a major league sport playing in that city, and the fans recognize that and are embracing it as such," Sakiewicz said. "Sometimes it's better to be in a sold-out, packed house with a relevant team in a city like Austin than not having a full house in a city like New York, and competing with all the other distractions in cities like that.

"It showcases what the possibility is [for MLS]," said Sakiewicz, who now serves as commissioner for the National Lacrosse League. Eager to get in on the action, Sakiewicz said he's made trips to Austin recently to scout out arenas where a new franchise from the indoor lacrosse league could potentially make its home.

And who around here would say no to that? As long as the NLL is comfortable taking a back seat to the Verde, that is. Austin is now a soccer city, in a way no other city in the nation can match.