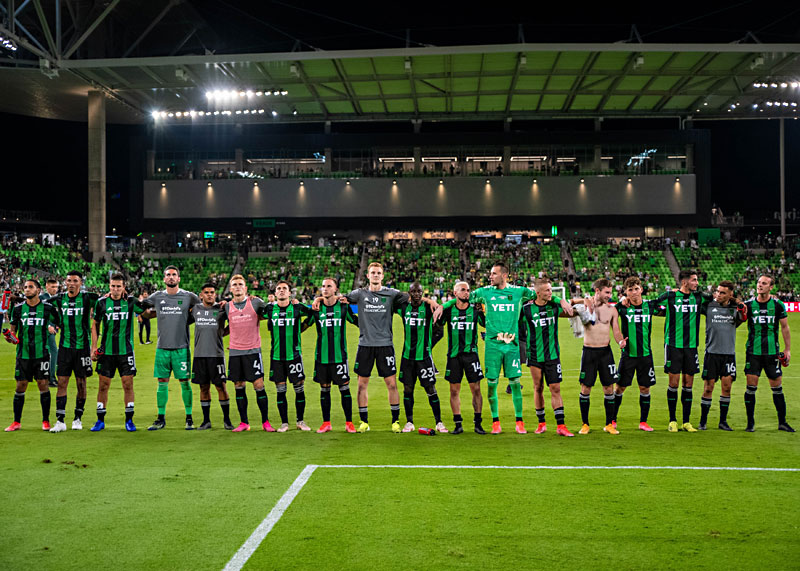 I'm not sure I'd bet on Austin hosting an Olympic Games in the near future, but boy, if the city ever did, what an opening ceremony it would produce.

That is as clear as ever after Austin FC's inaugural home match at Q2 Stadium delivered all the passion, spectacle, and emotion of an Olympic-sized curtain raiser. The tifo – a visual display created and deployed by fans before a game – further immortalized a checklist of Austin legends. Matthew McConaughey, looking like a yogi version of Batman's the Riddler with his Verde suit and djembe drum, single-handedly returned the word "cheerleader" to its literal definition. The pageantry vastly overshadowed the match itself, which ended in a 0-0 draw against the middling San Jose Earthquakes.

There was even a flyover, though not one timed to any beat of the National Anthem and certainly not chartered by club ownership. A small commuter plane towing the words "PRECOURT IS A SNAKE" buzzed around Q2 airspace before kickoff and served as an early preview to Austin FC's second home match, when the opening ceremony is done and dusted and the games begin for real.

It would not have taken a league inquiry to conclude that the plane – and the words taunting Austin FC's majority owner Anthony Precourt, were the work of a Columbus Crew fan, though the hosts of the pro-Crew Massive Report Podcast confirmed as much Tuesday. On Sunday, the Crew visits its former owner's new club with sights set on claiming the first MLS win and, potentially, scoring the first MLS goal in Q2 Stadium's history.

The stakes go up across the board in the Austin FC's second try at home. (Wednesday's away game at Minnesota United's Allianz Field unfurls as the Chronicle goes to press; find our game recap online.) One could argue – and this columnist certainly does – that last weekend's on-field result was secondary to the pomp and circumstance of the occasion. Sunday is a different story. A win will feel positively critical against the Crew, Austin FC's original rival.

As the Chronicle recounted in last week's Austin FC special issue, Precourt nearly relocated the Crew to Austin and is very much still public enemy No. 1 in Columbus. But ownership aside, Austin FC is intertwined with the Crew from top to bottom. Josh Wolff cut his coaching teeth as an assistant in Columbus before becoming Austin FC's head coach. Six players – Hector Jimenez, Kekuta Manneh, Aaron Schoenfeld, Ben Sweat, Andrew Tarbell, and the seemingly impenetrable Brad Stuver – plied their trade in Columbus before joining MLS's latest expansion club. One player, midfielder Sebastian Berhalter, even contractually belongs to the Crew and is in Austin for the season on loan (he is barred from playing against his parent club on Sunday).

MLS is smartly leaning into the unique rivalry in hopes that it might materialize into something nationally marketable. In a season where, to limit travel, teams play only two representatives from the opposite conference all year, it's no coincidence that the West's Austin FC and the East's Columbus Crew have a date together. It's no coincidence that the match is booked for a national audience on FS1 (kickoff at 7:25 pm).

Austin FC missed an opportunity to turn last weekend's home opener into something more than a ceremony. It can make up for that and then some with a strong performance in round two against the defending champions. Midfielder Diego Fagundez said following the draw against San Jose, "We're gonna make this a fortress, we're gonna make this a place that no one wants to play." The Crew might not feel that way going into Sunday, but it's imperative that the hosts make sure they're thinking it on the way out. 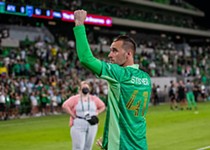 The Verde Report: Where Should the Verde Add Help?
The transfer window offers an opportunity to plug holes in the roster 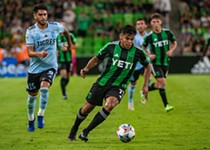 The Verde Report: The Honeymoon Is Ending. It’s Time for Austin FC to Earn Its Support.
Three things Austin FC needs to do to get some momentum going