Get to Know the Guy Behind "The Verde Report" 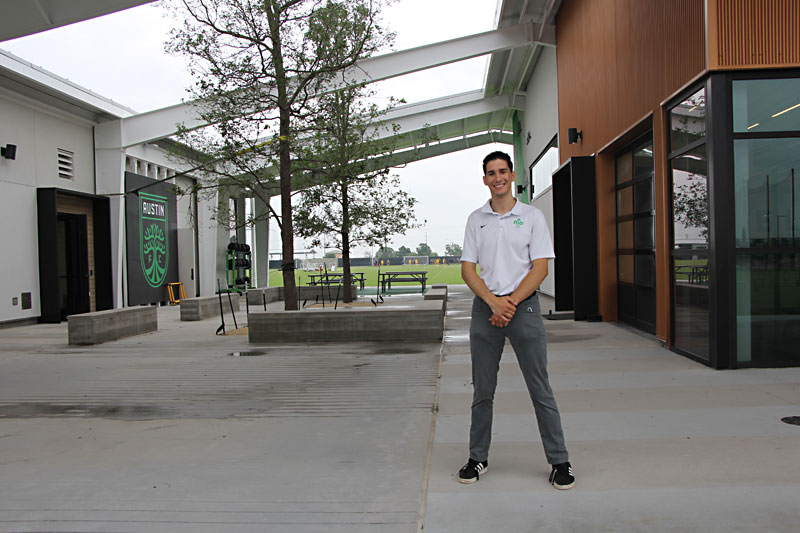 Eric Goodman wasn't necessarily looking to move back to Austin. The University of Texas graduate ('19, journalism and RTF double major) had already relocated up north when he saw a posting from the Chronicle seeking soccer writers to cover Austin's brand-new MLS expansion team. It didn't take long for Eric to become the Chron's go-to soccer guy, albeit from long distance, and his weekly Austin FC column "The Verde Report" launched on April 1. ATXFC diehards may have already met him on the road – Eric was there at the squad's historic first win at Denver – but he officially closed the distance and moved back to Austin in late spring – just in time to claim his seat in the press box at Q2 Stadium.

The Force is strong with this one. "In middle school I was a competitive fencer – ironically not one of the Olympic sports I cover," Eric says. His mom convinced the young Star Wars fan to give it a try. "She sold it to me as, ‘Do you want to learn how to fight with lightsabers like the Jedi?'"

His other loves. Eric, who grew up in Connecticut and Florida, spreads the love around when it comes to sports. "I'm a New York fan for pretty much everything – New York Giants, Knicks, the Nets, the Rangers – and Texas for college [sports]." When it comes to world soccer, his team is Valencia – "where my family hails from," he says.

The moment it clicked. Eric previously covered the 2018 Men's World Cup and the 2019 Women's World Cup for Fox Sports, but he wasn't always soccer's No. 1 fan. "The 2010 World Cup, when Spain ended up winning it – there was a semifinal against Germany that Spain won on a late-winning goal, and I scared everyone in my house by how much I screamed when that happened. That was the first moment when I realized, oh my goodness, I've been sleeping on this sport," he says. (That goal is still memorialized as his phone background.)

The great outdoors. While he was away, Eric missed how outdoors-oriented Austin is: "It's my favorite thing about the city." Getting outside is also a great way to expand his friend base. "I'm a very casual player of soccer, but the first thing I try to do in a new place is try to find a pick-up soccer game and build a friend network through that." (Hit him up on Twitter: @Goodman.)

Read Eric Goodman’s weekly column, “The Verde Report,” every Thursday in The Austin Chronicle, and find his match recaps at austinchronicle.com/austin-fc.

Want to get all things Austin FC delivered straight to your inbox? Subscribe at austinchronicle.com/newsletters.