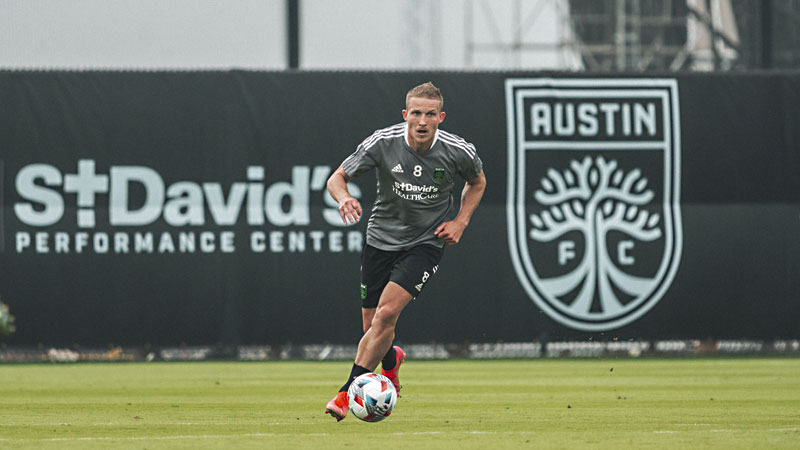 Alex Ring will miss Austin FC's next match against LA Galaxy, serving a one-game suspension for his red card. (Courtesy of Austin FC)

Austin is well-acquainted with the sporting world's most famous Finn. Racing driver Kimi Raikkonen scored his 21st Formula One race win, likely the last of his career, at Circuit of the Americas in 2018. When Raikkonen eventually hangs up his helmet (he turns 42 in October), he'll be remembered as one of the steadiest, most dependable drivers to ever race F1. But when the moment called for it, the former world champion's willingness to take a big risk helped make him one of the most popular figures the sport has ever seen, whether he wound up on the top step of the podium or nose-deep in a safety wall.

Whether by coincidence or by design, Ring's play on the field bears an uncanny resemblance to Raikkonen's on the track. Ring was a force of reliability from midfield in Austin FC's first three matches of the season, constantly completing pressure passes and disrupting opposing attacks while cruising around the pitch in top gear. He has simply been Austin's best player. But this past Sunday, Ring crashed out of ATXFC's match against Sporting Kansas City in a smoldering blaze of recklessness.

With Austin FC leading 1-0 in the 67th minute, Ring committed an unnecessary foul 50 yards from his goal to earn a second yellow card and ejection. The first red card in Austin FC history likely cost the Oaks three points and a chance at a piece of history. Austin FC was just over 20 minutes away from tying the best ever four-match start for an expansion team in Major League Soccer history. Instead, Josh Wolff's side conceded two goals while playing with 10 men – something they had yet to practice, according to Wolff – and left Children's Mercy Park with nothing.

"[The red card] changed the whole dynamic of the game," Wolff said after the loss.

Could it have been prevented? From Ring's standpoint, surely. Not even three minutes earlier, he was whistled for another reckless challenge and presumably was given a final warning by the referee. A player of Ring's experience and control should have eased off the throttle then and there and refocused his defensive efforts on positioning rather than tackling. Had it been any other player among Wolff's starting 11 teetering on a red card, the first-year head coach would have likely, and rightly, gone to his bench to replace that player and avoid disaster. But Ring is the linchpin and captain of the group, and in his 12-year professional career he has never before drawn a red. Taking him off, Wolff said, was not an option.

"Alex is the tip of the spear," Austin defender Nick Lima said. "He's always going to compete ... and we're going to follow that."

If Lima is right, then Austin FC will be a blunt instrument in its next match against LA Galaxy, Saturday, May 15, at 2:30pm, airing nationally in Spanish on Univision and in English on Twitter (@tudnusa). Ring must serve an automatic one-game suspension for the red card and will likely be replaced in the lineup by either Sebastian Berhalter or Daniel Pereira. Whichever young midfielder starts will have a dangerous Galaxy attack to contend with, led by MLS leading scorer and Mexican national team record goalscorer Javier "Chicharito" Hernández.

Ring will return the following week, May 23, when Austin FC heads to (the other) Music City to take on Nashville SC. The Oaks will need their captain back to his early season best to continue making noise in their debut season. Maybe the chance to watch his countryman Raikkonen race in the Monaco Grand Prix that morning will offer Ring some inspiration.